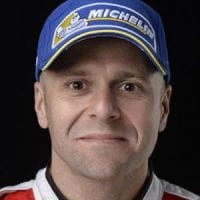 The early single-seater career of “Gimmi” Bruni included victory in the 1998 Italian Formula Campus Championship in what was his second season in cars. He then edged Antônio Pizzonia to win the following year’s Formula Renault Eurocup for JD Motorsport.

Bruni graduated to the 2000 British Formula 3 Championship with a Fortec Motorsport Dallara F300-Mugen. Fifth overall, he ended the year by finishing third in the non-championship Korean SuperPrix. He remained with the team in 2001 (now with Renault engines) and was again fifth in the championship.

The next two seasons were spent in the Euro 3000 series and his third place for ADM Motorsport in 2003 was in tandem with testing duties for the Minardi Formula 1 team. Bruni secured enough sponsorship to join the race team for the 2004 F1 World Championship. It was a far from stellar year for Grand Prix racing’s perennial backmarkers. Bruni’s Minardi PS04B-Cosworth was 14th on three occasions (the best results of his 18-race F1 career) but he was eliminated from his home race after the car caught fire during a pitstop.

Bruni stepped back into the new GP2 Series in 2005 and his Coloni Motorsport-entry was among the pacesetters at the start of the season. Victory at Barcelona and second at Monaco (both from front row starts) saw the Italian as an early challenger. However, his form faded before a switch to Durango saw the Roman qualify in pole position at Spa-Francorchamps. He joined Trident Racing for the 2006 and won twice – both from pole position – to clinch seventh after a season blighted by retirements.

With little prospect of returning to F1, Bruni switched to endurance racing and a Ferrari 430 GT2 for 2007’s FIA GT, Le Mans Series and ALMS championships. Always a contender for the class win, Bruni and AF Corse co-driver Toni Vilander won the 2008 FIA GT2 title but were narrowly beaten by Richard Westbrook a year later.

He started the 2010 Spa 24 Hours from pole position before sharing a Ferrari F458 with Giancarlo Fisichella in the GTE Pro class of the 2011 Le Mans Series. They won twice to clinch the title and Bruni followed that success with the 2012 International GT Open Championship for the team, now sharing with Federico Leo. He has won his class at Le Mans on three occasions – 2008, 2012 and 2014.

Having spent ten years racing for GT Ferraris, Bruni defected to Porsche for the 2017 IMSA sports car series from July’s race at Watkins Glen. He then switched to the World Championship squad for the 2018/19 “super season”. He finished second in GTE-Pro in the 2018 Le Mans 24 Hours and Shanghai 6 Hours before winning the class at the following year’s Sebring 1000 miles. Bruni shared a works Porsche 911 RSR with Richard Lietz and Fréderic Makowiecki for the second-successive year at Le Mans and finished second once more – just 49.193sec behind the class-winning AF Corse Ferrari. In 2020, Bruni finished fifth in class in GTE-Pro and 31st overall for Porsche with Lietz and Makowiecki.