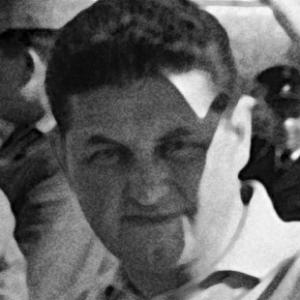 Four times a class winner in the Italian road races of the 1950s, it was the manner of Giulio Cabianca’s death that hit the headlines. Testing a Scuderia Castellotti Cooper T51-Ferrari at Modena late in the afternoon, his car got stuck in fourth gear, crashed through an open gate and into the main road outside. It collided with the oncoming traffic and three were pronounced dead at the scene. Still conscious, Cabianca was taken to hospital nearby but also passed away before the day was out.

He had raced in the late 1940s and made his debut on the Mille Miglia in 1948. Linked with the OSCA marque for most of his career, he was driving an OSCA MT4 as early as 1948 – winning national races Ferrara and Tigullio.

Although he also raced the car in occasional Formula 2 events, it was endurance racing that best suited both driver and car. He won his class on the 1952 Mille Miglia before leading and setting the fastest race lap on that year’s Targa Florio.

Eleventh on his Le Mans debut in 1955, he won the Sports 1500cc class in that year’s Targa Florio (when a fine seventh overall) and 1956 Mille Miglia. Cabianca then finished second in the Targa Florio but he was disqualified for using an unauthorised relief driver (Luigi Villoresi). He switched to an OSCA S950 to win the 1100cc category in the 1957 Mille Miglia.

Cabianca returned to single-seaters in 1958 with an F2 OSCA but he retired at Syracuse and failed to qualify at Monaco. Undeterred, he made his Grand Prix debut driving Jo Bonnier’s Maserati 250F in that year’s Italian GP and was running fifth when the engine let go. He returned a year later in Ottorino Volonterio’s 250F to qualify and finish last.

Cabianca was a sometime works Ferrari sports car driver in 1959 and he retired from the Le Mans 24 Hours in the sixth hour. Retained for a second season, he was put into the Ferrari Dino 246S of Willy Mairesse and Ludovico Scarfiotti during the closing stages of the 1960 Targa Florio in a vain attempt to wrestle third place from Hans Herrmann’s Porsche. Ultimately, he had to settle for fourth in what was still his best outright finish in the World Sportscar Championship.

His third and final GP came in the 1960 Italian GP when driving the Castellotti Cooper T51-Ferrari. With the British teams boycotting the race due to the use of Monza’s fearsome banking, it proved to be a Ferrari walkover but Cabianca finished in a career-best fourth position.

He finished second in the 1961 Mille Miglia regularity trial shortly before his tragic death.