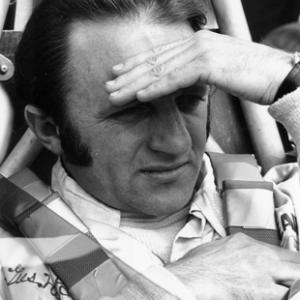 Motor racing was only ever a hobby for this successful entrepreneur. A chemistry graduate of the University of Georgia, Gus Hutchison moved to Dallas in 1962 and founded Chemscope with an initial investment of $750. Within five years the chemical manufacturing company was turning over in excess of $1million.

His early racing exploits during 1958 were with an old MG but he was driving an Elva Courier when he won his first race at Tuskeegee a year later. He competed on a shoestring budget at the time and camped at the circuits to conserve his meagre funds.

With success in business came a move into Formula Junior with a Lotus 20 and Hutchison won the 1964 South-western regional title. He started his first professional race in 1966 before acquiring a Lotus 41B for what would be his most successful season in the sport.

Formula A – a category that would later become Formula 5000 – was introduced in 1967 and Hutchison’s Lotus dominated by winning four out of the five qualifying rounds. He also formed Hutchison Racing Engines that year to prepare twin-cam engines for the SCCA’s professional categories.

A rule change led to Hutchison briefly leaving the sport but he returned for the final Formula A race of 1969 when he was second at Sebring. He bought an ex-Jacky Ickx Brabham BT26A-Ford with which he finished as runner-up in the 1970 standings and made a one-off Grand Prix start at Watkins Glen that autumn. He qualified the car 22nd for the United States GP but retired when his fuel tank fell off.