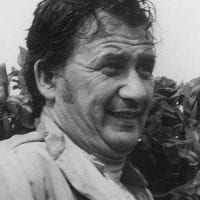 From apprentice baker to Mercedes-Benz Grand Prix driver, Hans Herrmann’s rise to fame was rapid indeed. He enjoyed a long and successful career in sports cars but his Formula 1 ambitions were irrevocably harmed by injury and the marque’s withdrawal in 1955.

He ran the family café after World War II and started racing in 1952 with a Porsche 356A. A class winner on the 1953 Mille Miglia with Erwin Bauer, he was named as German 1500cc Champion that year. That season also included his GP debut at the Nürburgring when he finished ninth in Hans Klenk’s Veritas Meteor and Herrmann was invited to join Mercedes for its F1 return in 1954.

While waiting for the “Silver Arrows” to be readied, Herrmann and Herbert Linge shared the sixth placed Porsche 550 Spyder in the Mille Miglia but they only finished after narrowly missing a train on a level crossing.

The streamlined Mercedes W196 was finally introduced at the 1954 French GP and it did not disappoint. Juan Manuel Fangio and Karl Kling finished first and second but Herrmann‘s engine failed when running third and having set the race’s fastest lap. Herrmann was third in Switzerland and fourth in Italy driving the open-wheel version of the car to come sixth in the world championship.

Fourth in the 1955 Argentine GP with both Kling and Stirling Moss taking turns in the extreme heat, he crashed at Massenet during practice at Monaco. By the time he had recovered from the fractures he sustained, Mercedes had decided to withdraw from the sport once more and Herrmann needed a new employer.

He returned to Porsche in 1956 and won his class at Sebring when sixth overall. Third in the Targa Florio on a one-off in a Ferrari 860 Monza, he was that year’s German Sportscar Champion for Porsche.

It was with the Stuttgart marque that Herrmann enjoyed most of his success. He finished third at Le Mans in 1958 when sharing a Porsche 718 RSK with Jean Behra but crashed out of the following year’s German GP when his BRM P25 barrel-rolled in spectacular fashion at Avus with Herrmann thrown clear.

He drove Porsche’s Formula 2 car during 1960 with some success that included second at Solitude and sixth in the Italian GP at Monza. Herrmann was increasingly focused on sports cars with the marque and he won both at Sebring and on the Targa Florio that year.

When Herrmann started his F1 career, it seemed inconceivable that he would race in only 18 GPs and finish on the podium just once. He started three races in 1961 with a Porsche 718 and drove Roy Winkelmann’s Brabham BT18-Cosworth in the 1966 German GP when fourth in the F2 class in what was his last GP.

He also drove for Abarth in sports cars for a time but returned to Porsche in 1966. Winner of both the 1968 Daytona 24 Hours and Sebring 12 Hours with a works Porsche 907, he was part of one of the most dramatic finishes to the Le Mans 24 Hours ever staged. The closing stages of the 1969 race were sensational with Jacky Ickx (Ford GT40) battling Herrmann’s Porsche 908 to finish just 100 yards ahead after 24 hours and 3100 miles of close competition.

Back at Le Mans a year later with the formidable Porsche 917K, Herrmann and Richard Attwood survived a race of attrition and heavy thunderstorms to score Porsche’s first outright success in the race. With that race won, Herrmann honoured a promise made to his wife and retired from the sport.

He started an accessories company in Stuttgart a year later (Hans Herrmann Autotechnik) and proved an astute and successful businessman while appearing at historic events into old age.