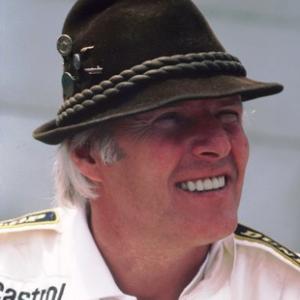 Two things immediately spring to mind when discussing Hans Heyer’s racing career – his hat and his one bizarre appearance in Formula 1. But that latter escapade is to ignore a talented, successful and popular driver by dint of one of the only two single-seater races during his long career.

The hat and a race he should not have started

First, the hat: Heyer was forever wearing an Austrian Tirolerhut even though he came from northwest Germany. Next, his unusual Grand Prix debut: Heyer hired the second ATS Penske PC4-Ford for the 1977 German GP but failed to qualify by half a second. Undeterred, Heyer entered the track after the start when allegedly aided by marshals friendly from his German racing days! Heyer retired from a race he had no right to start after nine laps with failure of his gear linkage.

Educated in Adenau, he competed in karts in Holland before legally entitled to do so in his home country. Dutch Champion in 1962 and 1963, he was fourth in the three-race 1969 World Championship.

Heyer made his European Touring Car Championship debut at the Nürburgring in 1970 and was second in the 1971 Spa 24 Hours with an AMG Mercedes-Benz 300 SEL. He joined Ford Deutschland by the end of the 1972 ETCC season and soon developed into one of the best endurance racing drivers in Europe. 1974 ETCC Champion for the team, he won the German Racing Championship in 1975 and 1976 with a Zakspeed Ford Escort.

With his 1977 F1 story in the record books, Heyer returned to those mighty German Group Five sports-racing cars and won the title again in 1980. That was driving a Lancia Beta Monte Carlo and was despite an end-over-end roll at the Norisring.

His 12 starts at Le Mans all ended in retirement but he was successful in sports cars elsewhere. He won four world championship events and finished on the podium in another eight. Three successive victories in the Spa 24 Hours from 1982 culminated in Jaguar’s first victory in the race in 1984.

He retired from racing in 1989 having started 999 races but returned to make his 1,000th start in a Volkswagen Polo Cup race at the Norisring in 2004