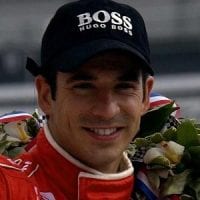 A four-time winner of the Indianapolis 500, star of television’s Dancing with the Stars and exonerated of tax evasion charges in 2009, Hélio Castroneves has many claims to fame. He hardly set Europe alight during his one season in British Formula 3 but his career in American open-wheel racing yielded fame and fortune.

Formative years at home and abroad

Yet to win a professional championship, Castroneves finished as runner-up in Formula Vauxhall, Sud-Am and Brazilian Formula 3 in successive seasons from 1992 to 1994 while racing in South America. He joined Paul Stewart Racing for the 1995 British F3 Championship and won at Donington Park. Third in the Zandvoort Masters, he also finished in that position in the final championship behind Oliver Gavin and Ralph Firman.

Rather than remain in Europe in 1996, the Brazilian moved to America to race in Indy Lights with Tasman Motorsport – runner-up in his second season with the team when narrowly beaten by compatriot Tony Kanaan.

Success at Indianapolis with Penske

He graduated to Champ Cars in 1998 with Tony Bettenhausen’s Reynard 98I-Mercedes and finished second at Milwaukee. 1999 was spent with Hogan Racing (qualifying on pole position at Milwaukee) but his breakthrough opportunity came in the most tragic of circumstances.

Canadian Greg Moore had signed for Penske Racing for the following season but was killed in the final round of 1999. Castroneves was drafted in as his replacement and did not let the chance go to waste – winning three times for the revitalised team. Better was to come in 2001 when he narrowly beat team-mate Gil de Ferran to win the Indianapolis 500 for the first time, a race sanctioned by the rival Indy Racing League.

Penske defected to the IRL in 2002 as America’s open-wheel civil war edged towards a conclusion. Despite his success so far, the American media kept calling him Neves so he changed his surname from Castro-Neves to Castroneves. The Brazilian became the first driver to win at Indy on his first two appearances (and the first back-to-back winner for 31 years) with his controversial 2002 victory.

Paul Tracy passed him on the penultimate lap just as the yellow light flashed for another accident. Castroneves was declared as the winner two days later after Tracy protested. He finished the year as championship runner-up behind Panther Racing’s Sam Hornish Jr.

On pole position for the 2003 Indy 500, he just failed to win the classic for a third year in a row when narrowly beaten by de Ferran. Castroneves finished third in that season’s standings and was remarkably consistent for the rest of the decade – always a race winner, never lower than sixth in the points but still unable to win the title.

Winner at Indianapolis for a third time

Runner-up again in 2008 behind Ganassi’s Scott Dixon, the start of the following campaign was compromised when accused of tax evasion by the American authorities. Castroneves missed the opening round but returned to the series at Long Beach after being acquitted. It was a stunning comeback – qualifying on pole position for the 2009 Indy 500 and winning the race for a third time. He also qualified on pole at Indy in 2007 and 2010.

Fourth in the championship that year and the next, he slumped to 11th in 2011 in his worst season since joining Penske. That included knocking team-mates Ryan Briscoe and Will Power out of the races at St Petersburg and Long Beach respectively.

He rebounded from that winless campaign to take two victories in 2012 as he finished fourth in the championship once more. Runner-up for the next two seasons and third in 2016, he came within 0.2011 seconds of becoming the fourth four-time winner of the Indianapolis 500 so far in 2017. He was passed by Takuma Satō with five laps to go but that second place finish briefly gave him the championship lead. He dominated the Iowa Corn 300 and entered the final round with a mathematical chance of the title. However, he finished fifth at Sears Point and championship victory continues to elude Hélio Castroneves.

The Brazilian switched to the IMSA sports car series in 2018 as part of Penske’s Acura line-up. Castroneves and Ricky Taylor scored the team’s first victory at Mid-Ohio and were second at Detroit’s Belle Isle as they finished seventh overall. He also raced for the team’s Indycar squad at both Indianapolis races and set the fastest race lap before crashing out of the 500.

Those race programmes continued in 2019 and Castroneves/Taylor finished third overall in the IMSA DPi standings, despite not winning a race. He was a lapped finisher at both races at Indianapolis.

Castroneves and team-mate Ricky Taylor took the 2020 IMSA Sportscar Championship. It was the first title he’d won for Team Penske but it marked the end of their 21-year association, following the team’s decision to end its partnership with Acura.

An 11th-place finish in that year’s Indy 500 didn’t result in a return to the IndyCar squad either.

For 2021, Castroneves agreed a partial-season programme with Meyer-Shank Racing and it would provide one of the feel-good stories of the season. But not before he joined Wayne Taylor Racing for the Daytona 24 Hours and won. Four months later, he was on top of the podium again, embracing Roger Penske, as he celebrated a fourth record-equalling Indy 500 win after coming out on top in a duel with 24-year-old Alex Palou over the final laps.