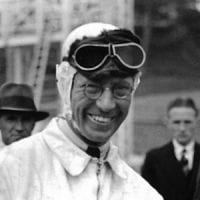 H.J.Aldington was an enthusiastic amateur racing driver who is best remembered as the motivating force behind Frazer Nash during the 1930s.

Early career in the motor trade

Known as “Aldy” as he did not care for his given names, he started his career as an apprentice with GN during the early 1920s and raced its cyclecars in his spare time. He later worked for the Black and Fitch car dealership in London’s Great Portland Street. It was an early agent for Archie Frazer-Nash’s new cars and Aldington was working directly for the manufacturer by 1925. The company was not in rude health however and it went into receivership two years later.

It re-emerged as AFN with Aldington as its Managing Director on a board that also included his brothers Donald and Bill. A chain driven Frazer Nash was the car to have for British hillclimbs during the 1930s. Aldington became AFN’s majority shareholder in 1932 and was a familiar figure in the British motor industry that decade.

As well as competing on the hills and in club events at home, Aldington entered continental rallies such as the Alpine Trial. It was in this form of the sport that he was first impressed by the BMW 328 saloon. He became its British agent in 1934 and BMW was the engine of choice for Frazer Nash by the end of the decade.

Aldington made his Le Mans debut in 1937 when he shared a Frazer Nash BMW 328 with A.F.P.Fane – retiring when the timing gear failed after 42 laps. The association with the German company continued after World War II. Aldington arranged for BMW engines to be manufactured under licence by the Bristol Aeroplane Company and then supplied to Frazer Nash.

He returned to the Le Mans 24 Hours for a second and final time in 1949 when co-driver for former motorcycle racer Norman Culpan who had bought a Frazer Nash High Speed a month earlier. They finished a fine third overall and that model was known as the Le Mans Replica thereafter.

Aldington’s own racing career ended when his eyesight was impaired after an accident but he remained as involved as ever through AFN and Frazer Nash. Notable successes for the marque included victories in the 1951 Targa Florio (with Franco Cortese driving) and 1952 Sebring 12 Hours (Harry Gray/Larry Kulok).
AFN became the UK importer for Porsche in 1956 and stopped producing its own cars a year later. It was eventually acquired by the Stuttgart manufacturer and is now known as Porsche Cars Great Britain.