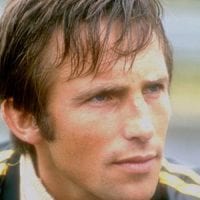 Fast but erratic, this Englishman was forever known as “Crashley” and his Formula 1 career ended in a huge accident while practising for the 1977 Canadian Grand Prix.

Born in Germany while his father was a test pilot with the Royal Air Force, Ian Ashley was living in Lincoln by the time he took a course at the Jim Russell Racing School in 1966. He started racing in Formula Ford a year later but it was in Formula 5000 that he started to show promise from his debut in 1972. Ashley won his first race a year later with a Henley Forklift Lola T330-Chevrolet.

Third in the 1974 European standings, he graduated to F1 that year for two GPs with the small Token Racing concern and was 14th on his debut in Germany. He also failed to qualify Richard Oaten’s Brabham BT42-Ford in Canada and the United States later that year.

Ashley started 1975 in Oaten’s F5000 team once more but another F1 opportunity presented itself when he was entered for the German GP in the second Williams FW03-Ford.

Unfortunately, he crashed during testing at the Nürburgring on the Tuesday ahead of the race and broke his ankle so could not start.

A one-off with the hopeless Stanley BRM P201B ended in retirement from the 1976 Brazilian GP but he returned with a works Hesketh 308E-Ford at the 1977 Austrian GP. Three DNQs were followed by 17th in the United States GP at Watkins Glen.

Canadian accident and life after Formula 1

The Canadian GP followed a week later and Ashley was lucky to survive that horrifying practice accident when the Hesketh took off as it crested a brow on the main straight. It cart-wheeled before crashing into a television tower at approximately 170mph. Conscious but with fractured ankles, it took an age to airlift him to hospital as a helicopter was not present. He did eventually recover to start five Champ Car races between 1985 and 1987.

Ashley later worked in America as a commercial pilot before returning to motor racing in 1993 to drive a Vauxhall Cavalier GSi in the British Touring Car Championship. Sidecars and TVR Tuscans have followed but historic racing has been his more recent pastime.