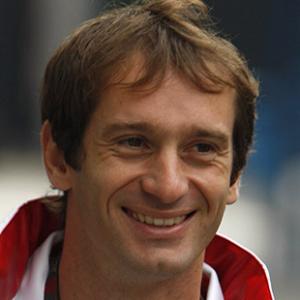 With a reputation as a stellar qualifier and a Formula 1 driver for over a decade, a dominant victory from pole position in the 2004 Monaco Grand Prix was the sole success of Jarno Trulli’s ultimately disappointing career.

He was named after Finnish motorcycle racer Jarno Saarinen who had been killed a year before Trulli was born. 1991 Formula Super A World Karting Champion, Trulli graduated to German Formula 3 in 1995. Fourth in his rookie year despite a late start to his season, he won the 1996 title with a KMS Dallara F396-Opel.

Formula 1 with Minardi, Prost and Jordan

Having raced cars for just two seasons, Trulli joined Minardi for the 1997 F1 World Championship. When Olivier Panis was injured during that year’s Canadian GP, Trulli was poached by Prost Grand Prix as his replacement. Immediately impressive, he finished fourth in Germany and qualified third in Austria. He led that latter race and was running second when his engine blew.

He joined Prost on a fulltime basis at the start of 1998 but second in the wet 1999 European GP was a rare highlight of two complete seasons with the team. He moved to Jordan for 2000 and qualified on the front row in Monaco and Belgium. However, he finished no higher than fourth in Brazil and Trulli matched that result in Spain and the United States during 2001.

Three years with Renault (2002 to 2004) included further examples of his qualifying prowess but there were too many lacklustre race displays. Third in the 2003 German and 2004 Spanish GPs, Trulli enjoyed the weekend of his life in Monaco that latter season.

He qualified on pole position for the first time and controlled the race despite two safety-car periods negating his undoubted advantage. Despite being a winner at last and on pole again in Belgium, his relationship with team boss and manager Flavio Briatore deteriorated. Trulli was sacked before the season was out although he still finished in a career-best sixth in the world championship.
Five years with Toyota

Trulli had signed a lucrative contract with Toyota and he made his debut for the Japanese team in the last two races of 2004. On the front row in Australia and Malaysia at the start 2005 and with podium finishes in three of the first five races, initial signs were promising. He qualified on pole position for that year’s United States GP but was forced to lead all the Michelin-shod runners into the pitlane and withdraw on safety grounds. It was one of F1’s most embarrassing days.

He raced for Toyota for five seasons and had his days. He was fourth from the pitlane in the 2006 United States GP and was third in France in 2008 but those were rare exceptions. Third again in Australia and Bahrain (from pole position) and second in Japan during 2009, his and the team’s form proved erratic.

The end of his F1 career with Lotus Racing

Toyota withdrew from F1 at the end of the year and Trulli joined newcomers Lotus Racing for 2010, the Malaysian-owned squad using that grand old name under licence. However, he spent the next two seasons overshadowed all-too-often by team-mate Heikki Kovalainen and he finished no higher than 13th. Despite having a contract for 2012, he was replaced by Vitaly Petrov in the renamed Caterham squad.

With his F1 career at an end, Trulli set up his own team in 2014 to race in the new all-electric Formula E championship. He finished fourth at Punte del Este during that inaugural campaign but the team was forced to withdraw at the start of the 2015/16 campaign when its new Motomatica JT01 proved beset with problems. Trulli has not raced since leaving Formula E.

Away from racing, this urbane and personable Italian is a passionate winemaker who is the co-owner of the Podere Castorani vineyard in the Abruzzo region in which he was brought up.