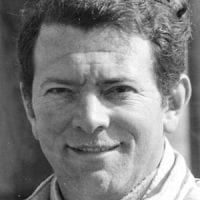 Jean-Pierre Jaussaud was already in his twenties when he started karting in 1960. He then enrolled in the renowned Jim Russell Racing School and won the 1963 Volant Shell scholarship to confirm that he had talent.

That promise was emphasised when he then won first time out in cars – the 1964 Pau Formula 3 race. He continued in that category for the rest of the decade and never finished outside the top three in the championship. Jaussaud also raced in Formula 2 at the time and his Matra MS5-Ford finished sixth in the final round of the 1967 European F2 Championship at Vallelunga.

Jaussaud won the all-important Monaco F3 race in 1968 but that year’s F2 campaign was interrupted by a violent accident at Monza. He broke his leg when thrown clear as his Tecno 68-Cosworth rolled and caught fire. He returned and finally clinched the French F3 Championship in 1970 after his Ecurie Winfield Tecno-Ford won seven of the 15 rounds.

His full-time graduation to F2 came in 1971 with a Shell-Arnold March 712M-Ford. He qualified on the front row at Járama and Crystal Palace but third in the non-championship Pau Grand Prix proved to be his best result that year. He drove an ASCA Brabham BT38-Ford in the 1972 Championship – winning twice and finishing as runner-up behind Mike Hailwood. Plans for ASCA – a group of French businessmen – to give Jaussaud his GP debut in Monaco came to naught. The 35-year-old Frenchman’s hoped-for graduation to Formula 1 did not materialise although he was on standby to replace the injured Chris Amon at the start of 1976.

Instead he continued in F2 and became a regular at Le Mans – finishing third in 1973 (Matra-Simca MS670B) and 1975 (Gulf Mirage GR8-Ford). Renault entered the Le Mans 24 Hours in 1977 with Jaussaud among its drivers. He retired that year but scored a famous victory in 1978 when sharing his Alpine A442B-Renault with up-and-coming star Didier Pironi. They celebrated by driving the car down the Champs-d’Elysées in front of celebrating Parisians.

With Renault concentrating its resources on F1, Jaussaud shared Jean Rondeau’s self-built Ford-powered M379B in 1980. In the lead by two laps, he survived a last-lap spin in the heavy rain to win the Le Mans 24 Hours for a second time. He continued to race for Rondeau for the next three years and made his 13th and last start in the 1983 event. Jaussaud also raced saloon cars and won Nogaro’s 1987 European round with a Garage du Bac BMW M3 and Fabien Giroix having lapped the field.