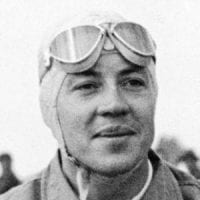 France’s greatest racing driver before Alain Prost and a Resistance hero during World War II, Jean-Pierre Wimille’s fame does not match his talent or what might have been. But for his untimely death, he would probably have been Formula 1’s first world champion, a pedestal instead reserved for Giuseppe Farina.

The son of the motoring correspondent of the Petit Parisien newspaper, he was inspired by the exploits of Robert Benoist during the 1920s. Wimille persuaded Bugatti’s Nice concessionaire Ernest Friedrich to lend him a car and he retired the Bugatti T37A from his debut at the 1930 French Grand Prix.

Having earned a wild reputation during a crash-filled 1931, Wimille won the La Turbie hillclimb at the start of 1932. A winner at Nancy and Oran, he led the GP du Comminges into the last lap but a serious accident made him temporarily reconsider his future.

Despite that, Wimille had made an impression and he was hired by a Bugatti team now managed by Benoist. Unfortunately, that opportunity coincided with the arrival of Mercedes-Benz and Auto Union teams that rendered all other marques uncompetitive against German state-funded might.

All French races were switched to sports car rules in 1936 and success followed for Bugatti and Wimille. He shared the winning Bugatti T57G with Raymond Sommer in that year’s French GP before making his debut in the Le Mans 24 Hours in 1937 when driving a T57G “tank” with Benoist. They dominated in the rain to win by over 100kms with Wimille also setting the race’s fastest lap.

By now at the height of his powers, Wimille apparently received an offer to drive for Mercedes which he turned down. He raced for Enzo Ferrari’s factory Alfa Romeo team in 1938 but the new 12-cylinder car was another disappointment and third at the Coppa Ciano was the highlight.

He won the 1939 Le Mans 24 Hours with Pierre Veyron and a Bugatti T57C with Europe on the brink of war once more. Wimille served with the French Air Force but France was soon occupied and so he joined Benoist in the Paris Resistance.

They were involved in the D-Day diversions near Nantes in 1944 before their network was trapped in a German raid two weeks later. Benoist was arrested in Paris and later executed while Wimille avoided capture at Sermaise by hiding in a stream. His wife Christine was not so fortunate but she managed to escape while being deported to Germany.

Both survived the war and he returned to racing with an altogether smoother and more mature driving style than before. The first post-war event was held in Paris’s Bois de Boulogne on September 9 1945. Held in honour of Benoist, Wimille fittingly won the Coupe des Prisonniers from the back of the grid having arrived too late to qualify.

He emerged as the fastest and most respected driver of the 1940s. Having driven a private Alfa Romeo 308 during 1946, he joined the all-conquering works team in 1947. Victories in the Swiss and Belgian GPs established the Frenchman as Alfa Romeo’s natural team leader when Italian national pride did not demand a victory for team-mates Achille Varzi or Count Trossi.

He raced a Simca-Gordini in lesser events and defeated local hero Juan Manuel Fangio in the 1948 Rosario GP. Wimille returned to Argentina at the start of 1949 for the annual Temporada. Practising in Buenos Aires’ Palermo Park, Wimille lost control of his Simca-Gordini and rolled into a tree.

The cause was something of a mystery for swerving to avoid a spectator, the sudden blinding from the sunlight and mechanical failure have all been quoted as the reason. Suffering from head and chest injuries, Wimille lost consciousness in the ambulance and died before reaching hospital.

F1 and France had lost their natural first champion. He was posthumously awarded the Légion d’Honneur and a monument to Wimille stands at the Porte de Dauphine in Paris.