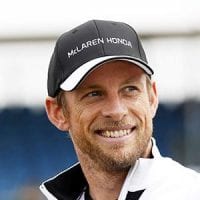 Jenson Button’s long and ultimately successful Formula 1 career included much frustration before fate finally dealt him a winning hand in the most unexpected of circumstances. Victory in the 2009 World Championship and that he subsequently more than matched Lewis Hamilton’s points tally while McLaren team-mates is evidence of a worthy and popular Grand Prix driver.

He was born into a racing family for his father was 1976 British Rallycross runner-up John Button. Named after a family friend rather than the British car company, the young Jenson Button competed in karts from eight years old. Multiple champion in his home country, Button was runner-up in the 1995 Formula A World Championship before becoming the youngest winner of the Super A European title so far two years later.

So it was amid some hype that Button made his Formula Ford debut in 1998 with a Haywood Racing Mygale SJ98. Pitted against a field that boasted talent such as karting rival Dan Wheldon, Button won nines times to clinch the British Championship at the first attempt. Subsequent victory in the Brands Hatch Festival and announcement as the McLaren Autosport BRDC Young Driver of the Year confirmed a special British talent.

The 19 year old graduated straight to British Formula 3 in 1999 driving a Promatecme UK Dallara F399-Renault and again he impressed. On pole position for his debut at Donington, he won three times (losing a fourth at Pembrey for a jump start) to finish a promising third overall. Button then came second behind Darren Manning at Macau and in Korea. Despite just two seasons racing single-seaters, Button tested for both the McLaren (as part of his young driver prize) and Prost F1 teams.

Formula 1 – the youngest Englishman to date

Expected to continue in F3 and on the verge of becoming Prost’s test driver, Button was invited to take part in a Williams-BMW head-to-head test against Formula 3000 race winner Bruno Junqueira to decide Ralf Schumacher’s team-mate for 2000. Successful that day, the youngest Englishman to start a Grand Prix to that date finished fifth in Britain and fourth in Germany. Even more noteworthy was his third on the grid at Spa-Francorchamps – a race that delivered another fifth place finish.

However, that was not enough to retain his seat for Williams opted to sign Champ Car star Juan Pablo Montoya for 2001. Still under contract, Button was loaned to Benetton for what proved a frustrating campaign – fifth at Hockenheim his only points score. With a pop star girlfriend and now living in Monte Carlo, the British tabloid press was only too happy to characterise the 21 year old as a playboy.

His second season with the team now known as Renault showed marked improvement with fourth place finishes in Malaysia and Brazil early highlights. Despite developing into a regular points scorer and finishing seventh in the championship, Button was on the move once more when replaced by reserve driver Fernando Alonso for the following season.

David Richards and British American Racing spotted an opportunity and Button signed a multi-year contract with BAR-Honda to begin a partnership that would eventually deliver the sport’s ultimate prize. He outshone the experienced Jacques Villeneuve during 2003 in the works Honda-backed team. He finished fourth in Austria before being sidelined by a heavy practice crash at Monte Carlo’s chicane. Button returned and finished fourth in the Japanese finale to clinch ninth overall.

The 2004 season may have been another dominated by Ferrari red but Button and the BAR 006-Honda emerged as the next best combination. On pole position for the San Marino GP, his ten podium finishes included second place finishes at Imola, Monaco, Hockenheim and Shanghai as Button came an impressive third in the standings.

With his reputation on the up once more, Button re-signed with Williams only for the Contracts Recognitions Board to decree that he must remain with BAR for another season. 2005 proved to be a season of two halves. The team was excluded from two races having been found to have been illegal at Imola and Button failed to score a point before mid-season. His first score came with fourth at Magny-Cours and he finished in the points thereafter. That included pole position in Canada and third places in Germany and Belgium.

Button seemed to spend more time with contract lawyers than on the race track during this period of his career. He had already inked a Williams-BMW contract for 2006 but decided the now Honda-owned BAR team was his best chance of finally winning a Grand Prix. A hefty financial settlement was eventually reached and Button signed a five-year contract with Honda. He began the year among the pacesetters and qualified on pole for round three in Australia although results were initially erratic. Then it started to rain in Hungary and Button came through the field to score a popular maiden victory. Seemly imbued with a new self belief, he finished top five in the remaining five races and was sixth overall in the 2006 World Championship.

However that did not signal a new dawn for 2007 was lost trying to sort the recalcitrant Honda RA107, complete with its controversial My Earth Dreams ecological livery. He normally started outside the top ten and fifth in China was the only result of note during a season rooted in the midfield. Button’s woes were only accentuated by the arrival of new McLaren superstar Lewis Hamilton who all-but won the title at the first attempt.

It was even worse in 2008 as Hamilton won the title while sixth in Barcelona delivered Button’s only points of the season. Frustrated by two disastrous seasons and with the world economy in meltdown, Honda withdrew from F1 at the end of 2008. Button agreed to a pay cut and spent the winter helping Team Principal Ross Brawn and others secure the Brackley-based concern’s future.

Out of adversity came Button’s greatest triumph. The team returned at the start of 2009 as Brawn GP and with Mercedes engines. That transformed the career of a former F1 playboy into World Champion. Brawn’s interpretation of 2009’s “blown diffuser” gave Button and team-mate Rubens Barrichello the edge from its first test. Button won six of the opening seven races, including a jubilant success in Monaco as he ran from where he had mistakenly parked his car to the Royal box. The title was now within Button’s grasp but Red Bull eroded Brawn’s car advantage and the Englishman’s form wavered. However, a late-season rally saw Button drive through he field in Brazil to finish fifth and clinch the 2009 World Championship with a round to spare.

Rather than defend his title with the now Mercedes-owned team, Button made a surprise move to McLaren for 2010. Many doubted the wisdom of joining the super-fast Hamilton in an environment he had made his own. Button used his renowned skills in changing weather to win two of the first four GPs (Australia and China) that year to help justify his choice. A further three second place finishes kept him in the five-way title scrap until the penultimate round – Button eventually classified fifth overall.

No one could stop Sebastian Vettel and Red Bull from retaining both titles in 2011 but the season proved to be an excellent one for the Englishman. Not as quick as his team-mate over a single lap, Button used his canny racing brain to win three times as he eclipsed an out-of-sorts Hamilton in the McLaren team to finish as runner-up in the World Championship.

That McLaren, and more particularly Button, won the first and last race of 2012 should suggest another challenge for the title. But a mysterious mid-season drop in form (another fine win at Spa-Francorchamps apart) stymied his challenge – Button fifth in the standings once more. That was Hamilton’s final season with McLaren and it is testament to the success of Button’s first three seasons with the team that he outscored his prodigious team-mate during that time.

Hamilton was replaced by Sergio Pérez in 2013 but the new McLaren MP4-28-Mercedes was not a competitive proposition and the team failed to finish on the podium all season. Early races included contact between the two McLaren drivers as they battled in the midfield. Fourth in the Brazilian finale was the best result of Button’s disappointing year.

Pérez was replaced by Kevin Magnussen in 2014 and all seemed set fair for a sharp turnaround in McLaren fortunes when they finished second (Magnussen) and third (Button) in Australia. However, that result just flattered to deceive. The new turbocharged McLaren MP4-29 was no match for the dominant Mercedes W05 and Button endured another disappointing campaign. However, strong races at the end of the year helped Button to narrowly eclipse Magnussen and earn a new contract for 2015.

Unfortunately, the new Honda turbocharged engine proved both unreliable and uncompetitive from the outset. Button and team-mate Fernando Alonso struggled to develop the package during an increasingly frustrating campaign. Hamstrung by a lack of straightline speed, McLaren slumped to ninth in the Constructors’ Championship with only Manor Marussia worse off. Button narrowly edged Alonso as the motivation (and diplomacy) of both was tested to the extreme. He finished sixth in the United States GP but 16th overall was hardly the return he had been hoping for.

The McLaren-Honda package was improved in 2016 and the team climbed from ninth to sixth in the standings. However, it was very much Alonso who led the way as Button bowed out of F1. He exploited circumstances to qualify a welcome third in Austria but then decided to take time away from the category – believing the time was right to make way for younger talent.

Named as McLaren reserve for 2017 and now an ambassador for Honda, Button made a one-off F1 comeback in Monaco when deputising for the Indianapolis-bound Alonso. The Englishman started from the pitlane and crashed into Pascal Wehrlein’s Sauber after 57 laps of his final GP appearance. He then made his debut in Japan’s Super GT series in the Suzuka 1000Kms as he contemplated racing in that series in 2018.

Button signed with Team Kunimitsu for the 2018 Super GT Series when sharing a Honda NSX with Naoki Yamamoto. Victory at Sugo was one of four podium finishes as they edged Nick Cassidy and Ryo Hirakawa for the title at the final round. In addition, Button joined SMP Racing’s LMP1 squad from the Le Mans 24 Hours on, sharing with Russians Mikhail Aleshin and Vitaly Petrov. They finished third in the chaotic 2018 Shanghai 6 Hours before Button stepped down in the New Year.

Button and Yamamoto suffered a frustrating Super GT title defence in 2019. They scored podium finishes at both Fuji round but slipped to eighth in the final standings.

In 2020, Button made his debut in British GT with his own Jenson Team Rocket RJN McLaren team. In the final round of the season, Button finished 14th with team-mate Chris Buncombe in the Silverstone 500.