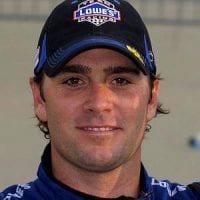 Stock car racing’s most recent superstar, New York based Californian Jimmie Johnson became the first driver to win five NASCAR Cup titles in a row in 2010. He then tied Richard Petty and Dale Earnhardt as a seven time champion before announcing his retirement at the end of the 2020 season. The introduction of the Chase for the Cup saw Johnson come alive as soon as that 10-race championship shoot-out began.

From motocross at the age of five and six off-road championship victories, the young Johnson was also always competitive. He made his debut in the second division Busch Series in 1998 and won for the first time at Chicagoland in 2001.

He also made his first three Cup starts that year in Rick Hendrick’s Chevrolet Monte Carlo and he continues with the team today. His 2002 campaign began with pole position for the Daytona 500 in only his fourth start and he scored the first of three victories at Fontana in round 10. The first rookie to lead the championship since 1965 and fifth in the final standings was not enough to be named as 2002 Rookie of the Year however for Ryan Newman beat him to that accolade.

The arrival of a new superstar was confirmed at the following May’s Charlotte meeting when he won both the non-championship All-Star race and rain-shortened Coca-Cola 600. He won more races and pole positions than 2003 champion Matt Kenseth but Johnson finished as runner-up.

He lost out to Kurt Busch by just eight points (the equivalent of a 36th-place finish) a year later despite eight victories that included another Coca-Cola 600 win and victory in Darlington’s Southern 500. Team-mate to four-time NASCAR champion Jeff Gordon, Johnson gradually eclipsed his friend and colleague.

Victory in the Coca-Cola 600 for a third year in 2005, Johnson added the blue ribbon Daytona 500 to his c.v. at the start of 2006. That was the prelude to his first NASCAR Cup title as he beat Kenseth and Denny Hamlin to the championship. Success breeds success and Johnson’s 2007 campaign gathered momentum as the year wore on – 10 victories ensured that he overhauled Gordon in the Chase to retain the Nextel Cup for the first time.
There was a perceived inevitability to the next two seasons as Johnson repeated his championship success in the renamed Sprint Cup. First he equalled Cale Yarborough’s then record three-in-a-row before he bettered it in 2009.

He scored his 50th NASCAR victory during 2010 but cracks in the apparent Johnson/Gordon partnership showed later that year when they clashed in successive races. Hendrick shut down a public war of words and Johnson withstood pressure from Hamlin and Kevin Harvick to win NASCAR title number five.

Every run has to come to an end and Johnson won just twice during 2011 to finish only sixth in the championship as Tony Stewart claimed the title. Back on form in 2012, Johnson battled Penske’s Brad Keselowski for the title. He scored back-to-back wins during the Chase (both from pole position) to lead the championship with two rounds to go. However, a puncture at Phoenix and engine failure in the Homestead finale dropped him to third in the final points.

Having missed out on the title for the past couple of seasons, Johnson won six times during 2013 to beat Kenseth and clinch his sixth NASCAR title at the final race at Homestead. He recovered from a slow start to 2014 to win the Coca-Cola 600 for a fourth time and register his first victory at Michigan. A new knockout Chase for the Cup was introduced that year and he dominated at Texas. But Johnson was eventually eliminated from that end-of-season title decider and officially classified 11th in what was his lowest championship position since he had raced fulltime.

He won five times during both 2015 and 2016 as he continued his unbroken run of qualifying for the end-of-season Chase. His 2015 hopes ended when he retired at Dover but he prevailed in the following year’s Homestead decider to match Petty and Earnhardt’s seven Cup titles. That outcome had seemed unlikely during a mid-season 24-race winless streak and when forced to start the finale from the back of the grid. But he worked his way through the field and he took the lead on the final restart to snatch the spoils.

He remained with Hendrick for 2017 and won three times to take his tally to 83 victories. However, he crashed into Jamie McMurray after his brakes failed at Pocono with his rival’s car engulfed in flames. Johnson qualified for the Chase once more but was classified tenth after a couple of costly accidents. Winless in 2018 and 2019, Johnson announced that 2020 would be his last NASCAR season before retirement.

Johnson announced in 2020 that he would be driving in IndyCar on a part-time basis for Chip Ganassi Racing in 2021 and 2022. He will be competing in street and road courses.