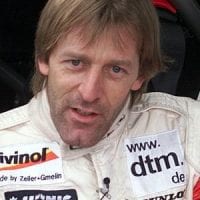 “Smokin’ Jo” Winkelhock is the middle of three racing brothers and he followed older sibling Manfred into Grand Prix racing for a brief but unsuccessful spell with AGS. However, he enjoyed a long and rewarding career in sports cars and saloons thereafter.

He first competed with a Renault Five in 1979 and made his German Formula 3 debut four years later. Manfred’s death in 1985 interrupted his career but the younger Winkelhock returned with resolve and success. He drove WTS Racing’s Reynard 873-Volkswagen in 1987 and won the final round to finish as runner-up behind a dominant Bernd Schneider.

He remained with the team for 1988 and won the opening three rounds. He tested for Zakspeed shortly before winning again at Wunstorf. German F3 Champion, Winkelhock beat the cream of that year’s F3 stars from across the continent in the European Cup at the Nürburgring.

That success led to Formula 1 and a horrible half season with the tiny AGS outfit – unable to pre-qualify an AGS JH23B-Ford for any of the seven GPs he entered. Winkelhock re-established himself with BMW in touring cars in Germany – a winner in the DTM and Nürburgring 24 Hours.

Successful in sports cars and saloons

He transferred to the British series in 1993 with Schnitzer’s BMW 318i. With lit cigarette normally in hand, he was soon a favourite with the press and fans alike as he fended off a late-season charge from Ford’s Paul Radisich to clinch the BTCC title.

Further championship success followed for BMW. 1994 Asia-Pacific Champion and 1995 German 2000cc title winner, he also won the Spa 24 Hours that latter year. Winkelhock was inevitably part of the line-up when BMW entered Le Mans. He retired from the 1998 race before he shared the 1999 winning BMW V12 LMR with Pierluigi Martini and Yannick Dalmas, the man who had replaced him in F1.

Winkelhock raced Opels in the DTM from 2000 to 2003 before retiring from motor racing. He now runs the family crane hire business in his native Waiblingen near Stuttgart.