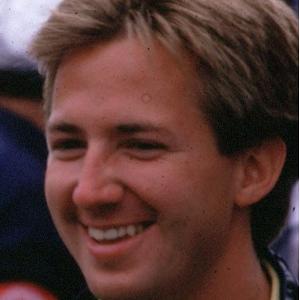 Being the son of Aldo Andretti – Mario’s twin brother – gave John the advantages of a famous name and racing blood in his veins. He may not have enjoyed as much success as his cousin Michael, but he was a race winner in Champ Cars, NASCAR and IMSA – earning some $30m in prize money for his troubles.

With five years of karting experience behind him, John Andretti attended the André Pilette Racing School at Zolder with Michael in 1979. While the latter learnt in the public glare of America’s open-wheel formulae, John drove in junior stock cars, then switched to USAC midgets in 1983.

He won the rookie award that year and starred in sprint cars and IMSA prototypes over the next four years. Andretti partnered Davy Jones in a works-backed March 86G-BMW for IMSA’s 1986 GTP season. A dominant victory at Watkins Glen was the highlight but a change of marketing strategy ended the programme.

Instead, Andretti made his Champ Car debut at Elkhart Lake in 1987 driving Mike Curb’s March 87C-Cosworth – joining both Michael and Mario on the grid. He finished sixth that day although that proved to be his best result in 18 months with the Skoal Bandit-sponsored team. He also made his only start at Le Mans in 1988 when the three Andrettis shared the sixth–placed works Porsche 962.

Champ Car success continued to prove elusive but it was a different story in IMSA. He drove Jim Busby’s Miller High Life Porsche 962 in 1989 and won both the Daytona 24 Hours and at West Palm Beach.

Those successes won Andretti the Porsche North America Cup and a works drive in the marque’s fledgling Champ Car team for 1990. Fifth at Cleveland and Vancouver, Andretti was the championship’s best placed non-Chevrolet driver. His move to Jim Hall’s new Pennzoil-backed team after just one season proved inspired. Andretti’s Lola T91/00-Chevrolet won on his debut for the team in the inaugural race on the streets of Surfers Paradise on Australia’s Gold Coast.

It was his only Champ Car victory but he was also fifth at Indianapolis and second on the Milwaukee Mile in what was an all-Andretti podium. Eighth in the points both in 1991 and 1992, Andretti was then dropped from Hall/VDS Racing in favour of former Porsche team-mate Teo Fabi.

A race winner in NASCAR

His NASCAR debut at North Wilkesboro in 1993 was hardly auspicious – spinning Billy Hagan’s Chevrolet four times on the way to a lowly 24th at the finish. He made history in 1994 by becoming the first driver to race in the Indy 500 and Charlotte’s Coca-Cola 600 on the same day. His 10th-place finish at the Brickyard (driving for his godfather A.J.Foyt Jr) was his final Champ Car start.

But he continued as a fulltime NASCAR driver and switched to Petty Enterprises in August 1994 when Hagan ran short of sponsorship. On pole position for the 1995 Southern 500 at Darlington in the Kranefuss-Haas Racing Ford, he switched to Cale Yarborough Motorsports in the middle of 1996 and his RCA Ford Thunderbird won the 1997 Pepsi 400 at Daytona.

He almost won again at Martinsville before returning to Petty Enterprises when his sponsor withdrew. Driving Petty’s fabled STP number 43, Andretti was a career-best 11th in the 1998 standings and scored another victory at the start of 1999 after recovering from a lap down at Martinsville.

Petty switched from Pontiac to Dodge for 2001 and Andretti began to struggle. He left the team mid-2003 and continued to race in NASCAR until 2010 without threatening to add a third victory.

Andretti was diagnosed with stage four colon cancer in April 2017 but he was initially given the all-clear following chemotherapy. Unfortunately, the disease returned and he died in January 2020 when just 56 years old.