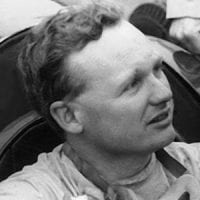 This Surrey car dealer indulged his hobby in lesser Formula 1 races during the early 1960s and twice raced in the world championship.

John Campbell-Jones raced a Lotus 11 sports car in British club events from 1957 before he tried his luck in Formula 2 and F1. He was injured at Modena in 1961 but returned for his world championship debut in the 1962 Belgian Grand Prix with Emeryson. When his gearbox failed in practice, the team borrowed a Lotus 18-Climax with which he finished 11th and last.

Campbell-Jones drove Tim Parnell’s Lotus 24 and Lola Mk4-Climax during 1963 and he again qualified and finished last in his second and final GP – driving the Lola in the British GP at Silverstone. He quickly disappeared from the racing scene although he drove a BRP-Climax in the 1966 Oulton Park Gold Cup.

He added restaurateur to his professional c.v. but is now retired and living in Ramsgate. His daughter Emma is a British television actress who counts EastEnders, Taggart and Dr Who among her credits.