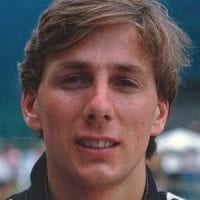 Charm and popularity do not ensure motor racing success although Johnny Dumfries was a Formula 1 driver for a season and successful in sports cars. Blessed with the privilege of nobility and wealth, Johnny Bute (as he was later known) still had to strive to make his way in the sport.

Successful career in the junior categories

He worked as a painter/decorator and as a van driver for Williams in order to raise the money to go motor racing. He secured the budget to graduate from Formula Ford to Formula 3 in 1983 under the guidance of his cousin Charlie Crichton-Stuart. It was a season of promise with a Dave Morgan-run Ralt RT3-Volkswagen, matching better funded rivals on his day and 10th in the championship.

Dumfries was rewarded with BP backing for 1984 and he enjoyed a fine season. His Dave Price Racing Ralt-VW was the dominant force in Britain and he won that series with ease. He also challenged Ivan Capelli for the European crown but eventually finished as runner-up.

The Scot was hot property and tested for the Ferrari F1 team. He graduated to Formula 3000 with a works-assisted Onyx March 85B-Cosworth despite precious-little backing. He qualified fourth for his debut at Silverstone and finished sixth at Vallelunga although that was his last race with the team before his sponsorship ran out. A couple of races in the uncompetitive works Lola T950-Cosworth followed but immediate prospects seemed bleak.

However, when Ayrton Senna objected to Derek Warwick being his Lotus team-mate for the 1986 F1 season, it was Dumfries who was chosen instead. That was a disappointing campaign with fifth in Hungary and sixth in Australia his only points scores before he was replaced by Satoru Nakajima for the following season.

He tested a Benetton during 1987 and made a couple of less-than-impressive F3000 appearances a year later. But he was already racing in sports cars by that time. 1987 was spent with Ecurie Ecosse, Sauber-Mercedes, Richard Lloyd Racing and Silk Cut Jaguar and he won the Spa 1000Kms for the latter. He was also successful in an IMSA race at Elkhart Lake when sharing Rob Dyson’s Porsche 962.

The greatest race of his career was the 1988 Le Mans 24 Hours which he won with a Jaguar XJR-9LM, Jan Lammers and Andy Wallace. It was the marque’s first victory in the race since 1957. He moved to TOM’s Toyota for the next two seasons before retiring from the sport to concentrate on his property business and the estate.

He created the Mount Stuart Classic on the Isle of Bute in 2002, featuring contemporary F1 cars, historic and classics racing through the grounds of his ancestral home.