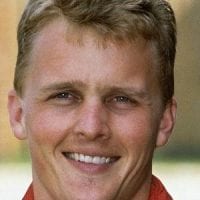 Johnny Herbert arrived at the 1988 Brands Hatch Formula 3000 race poised to be Britain’s next Grand Prix star. Reigning British Formula 3 Champion and winner on his F3000 debut, he had already completed successful tests for Benetton-Ford and Lotus-Honda. But, a sickening accident put his life in doubt and his career in the balance.

A winner in karts and cars

Winning the 1982 British Karting Championship and taking victory in the 1985 Formula Ford Festival when driving the unfashionable Quest FF85 confirmed his promise. That latter success was achieved despite crashing in practice and therefore having to work his way through from the back of the field. Herbert’s Eddie Jordan Racing Reynard 873-Volkswagen was third at Monaco and he dominated British F3 during 1987 – winning five times.

EJR and Herbert graduated to F3000 in 1988 and his Reynard 88D-Cosworth led the opening round at Jerez all-the-way from pole position to victory. Third at Monza and heartened by those impressive Formula 1 tests, Herbert seemed on course for the F3000 title and GP racing.

On pole again at Brands Hatch, he clashed with Gregor Foitek during the race and hit the barriers head-on at Pilgrim’s Drop. Herbert broke both of his legs but such was his reputation that Benetton signed the injured Englishman for the 1989 F1 World Championship.

Hardly able to walk, Herbert took his Benetton B188-Ford to fourth on his F1 debut in Brazil, just 10.493 seconds behind the winner and ahead of more experienced team-mate Sandro Nannini. Despite that sensational performance, Herbert’s injuries had not fully healed and he was replaced after just six rounds.

Herbert struggled for five years to re-establish himself. Victory in the 1991 Le Mans 24 Hours for Mazda – the first for a Japanese manufacturer and a rotary engine – restored some lustre but part-time F1 spells with Tyrrell and then Lotus only allowed glimpses of his talent.

On the ascendency once more

However, with former Benetton Team Manager Peter Collins now in charge at Lotus, Herbert joined on a fulltime basis from mid 1991. He often outpaced team-mate Mika Häkkinen only for poor reliability to restrict him to just two points scores during 1992 and deny him a probable third place finish at Silverstone.

The Finn moved to McLaren but Herbert remained contracted to Lotus for the last two seasons of a once-great marque. However, he was back in demand by the end of 1994 and switched to Ligier and then Benetton when both teams were run by Flavio Briatore.

He stayed with Benetton as team-mate to new world champion Michael Schumacher but remained in the German’s shadow for much of 1995. However, the ever popular and genial Essex driver benefited when Schumacher and rival Damon Hill collided at Silverstone and Monza to score maiden F1 victories and finish fourth in the 1995 World Championship.

That was not enough to retain his drive and Herbert then endured three difficult seasons with Sauber. He finished third at Monaco in 1996 but suffered a huge accident at Ste Devote a year later.

Also third in the 1997 Hungarian GP, Herbert moved to Stewart Grand Prix in 1999 and scored an unexpected final F1 victory in changeable conditions at the Nürburgring. A final, pointless season with the now rebranded Jaguar Racing in 2000 bought Herbert’s GP career to an unreliable and uncompetitive close.

Sports car champion and future in the media

He continued to race in sports cars and success in the American Le Mans Series with an Audi R8 included victories in the 2002 Sebring 12 Hours and 2003 Petit Le Mans at Road Atlanta. Second for Audi North America in the 2002 Le Mans 24 Hours, he repeated that result a year later with a Bentley Speed Eight.

The Volkswagen Group’s marketing objectives swung back from Bentley to Audi once more in 2004 and Herbert shared an Audi Sport UK Team Veloqx R8 with Jamie Davies in the Le Mans Series. He qualified on pole position for the 24-hours itself before finishing second once again. Twice winners in the series, Davies and Herbert were crowned Le Mans Series Champions that year.

Herbert won the all-star 2008 Speedcar Championship for identical stock cars with a double victory at the Dubai finale. Most recently, Herbert has successfully plied his trade as part of Sky Television’s line-up on British television.

It is impossible to tell what he could have achieved but for his injuries although three GP victories are testament to a resolute and talented driver.