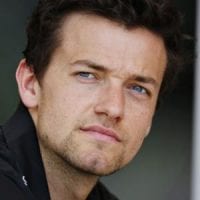 The son of former Grand Prix driver and entrepreneur Jonathan Palmer, Jolyon Palmer emerged from four seasons in GP2 with the title and his own passage to Formula 1. Unfortunately, two seasons with Renault provided little but frustration and Palmer has since forged a career in the media.

Education and early career in Formula Palmer Audi and F2

Jolyon Palmer began racing in MiniMax karts during 2004 before making his debut in cars in the following year’s T-Car Autumn Trophy. He remained in that saloon car series for under 17 year old drivers and finished fifth in the 2006 standings. He then dominated the Autumn Trophy by winning four of the six races.

Palmer spent the next two seasons combining studies at Cranleigh School with winning races in Formula Palmer Audi – the low cost one-make series devised by his father. He won at Brands Hatch and Oulton Park in 2007 but his season was cut short by injuries sustained in a quad biking accident. Tenth overall that year, he won at Spa-Francorchamps during a consistent 2008 campaign. Palmer was third in the standings but, inevitably perhaps, any success was overshadowed by who his father was.

Jonathan Palmer won the FIA tender for a new Formula 2 Championship in 2009 and again adopted a philosophy of a centrally run, one-make single-seater series to control costs. Now at University in Nottingham, Jolyon was among the field for that inaugural campaign but it proved to be a disappointing season – sixth at Imola the only time he finished in the top 10. Palmer showed a marked upturn in form during 2010. He won the opening race at Silverstone and scored another four F2 victories as he finished as runner up behind Dean Stoneman.

Four seasons in GP2 culminate in the title

After four seasons racing in his father’s championships, Palmer graduated to GP2 in 2011 with Arden International. He finished ninth in the sprint race during the opening weekend in Turkey and repeated that result in the Valencia feature. That was as close as Palmer came to scoring points during a difficult first season at this level. The end-of-season non-championship GP2 Finals in Abu Dhabi were all together more promising. A switch to Barwa Addax for the weekend saw Palmer qualify fifth, briefly lead the feature race during the pitstops and finish in third and fourth positions.

He joined iSport International’s GP2 line-up for 2012 and continued to make progress. Initially hampered by reliability issues, it was at Monaco that he made his major step forward. Sixth in the feature race, he led Sunday’s sprint from start to finish to score his maiden GP2 victory. He also finished third at Silverstone and Monza and was 11th in the final points.

Palmer moved to Carlin for his third GP2 season and won twice (the Hungarian and Singapore feature races) on the way to seventh overall. He qualified on pole for that latter victory but poor grid positions often forced a raceday charge through the field during 2013 – earning Palmer a reputation as a prodigious overtaker but limiting his points tally.

The 2014 GP2 season was one in which Palmer simply had to deliver, and deliver he did. He joined DAMS for his fourth season in the series and transformed his qualifying performances. On the front row for eight of the 11 feature races (including three pole positions), he won four times to ease to the title. That included a storming weekend at Monza after being excluded from qualifying for not having enough fuel in the tank to provide a sample. He came from the back-of-the-grid on Saturday to finish eighth before converting the resulting pole position into victory on Sunday morning.

Unable to secure a race drive for 2015, Palmer spent the year as test and reserve driver for the financially challenged Lotus team. He tested on the Friday of most Grand Prix weekends and impressed enough to be promoted to the now Renault-owned concern’s race team in 2016. Hampered by uncompetitive machinery during his rookie season, Palmer gradually improved and ended the season by generally out-qualifying team-mate Kevin Magnussen. A points finish was denied by a spin in Hungary before he finished 10th in Malaysia to score for the first time.

Palmer was retained for 2017 although that proved to be an unhappy experience. Hampered by poor reliability, he could not match new team-mate Nico Hülkenberg in qualifying and it was the Singapore GP before he scored a point. He benefitted from the opening lap chaos that night to run as high as fifth. A career-best sixth at the finish was not enough to save his place in the team for Palmer was replaced by Carlos Sainz for the last four races of the season.

Career in the media