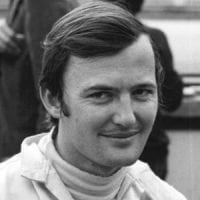 Signing as a works Ferrari driver is normally the ultimate move for any up-and-coming hopeful but it perhaps spelled the career death-knell for this promising pedaller. The son of a World War II Squadron Leader in the Royal Air Force, Jonathan Williams first competed with a Mini at Snetterton in 1961 before switching to an Austin A40 for the following season.

He raced in Formula Junior during 1963 but was injured after crashing his Merlyn at Monaco’s Tabac Corner during his heat. He returned with a Lotus 22 and formed Anglo-Swiss Racing with friend and flat-mate Piers Courage for the 1964 European Formula 3 season.

They moved to Charles Lucas’ F3 team in 1965 and Williams’ Brabham BT10-Ford won at Zolder and Monza before breaking his legs when he crashed at Reims. He joined De Sanctis for the following two F3 seasons and won the Monza Lotteria in both 1966 and 1967.

He also raced a Ferrari in sports cars during 1967 and finished fourth in the Targa Florio and sixth at Brands Hatch. Williams drove a Formula 2 Ferrari at Rouen-les-Essarts and replaced the injured Michael Parkes in its line-up for that year’s Mexican Grand Prix. He qualified the Ferrari 312 in 16th position and was lapped twice before finishing eighth in what would be his only GP appearance.

Williams was not retained for 1968 and his career had been fatally harmed. He was named as lead driver for the new Abarth F1 team in January 1968 although that V8 powered car was never built. Instead, Williams returned to F2 and won the Monza Lotteria for the third year in a row on a one-off in Frank Williams’ Brabham BT23C-Cosworth. He eventually retired from the sport to work as a pilot in the south of France – employed at one stage by Alejandro de Tomaso.