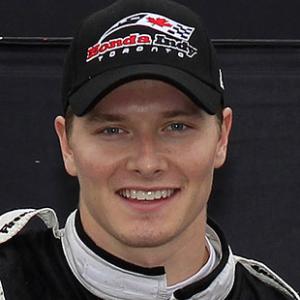 This native of Nashville, Tennessee attended the Skip Barber Racing School during 2006 before starring in North American Formula Ford. He travelled to England in 2008 to win the Kent class of the Brands Hatch Festival. He returned a year later and impressed on a one-off weekend in Formula Palmer Audi – winning two of the three races during the opening weekend.

He finished as runner-up in the 2009 British Formula Ford Championship in a season marred by the death of his team boss Nick Tandy in a road accident. Newgarden graduated to the new GP3 Series in 2010 with Carlin but it proved to be a disappointing campaign. Although he qualified on pole position at Hockenheim, fifth in the final round at Monza was his best result of his last European campaign.

Newgarden returned to America for the 2011 Indy Lights Series with Sam Schmidt Motorsports. That decision was rewarded with five victories (proving to be equally adept on road courses and ovals), the title and an Indycar drive for 2012.

He joined Sarah Fisher Hartman Racing and qualified in a fine seventh for the Indianapolis 500. Sidelined by engine failure after 161 laps of the race, 11th on his debut in St Petersburg was his best result of the 2012 IndyCar Series. He remained with the modestly funded outfit for the next two years and showed glimpses of real promise. Second at Baltimore during his sophomore season with the team, he repeated that result at Iowa as he grew ever-more competitive during 2014.

SFHR merged with Ed Carpenter Racing for the 2015 IndyCar Series with the renamed CFH Racing now powered by Chevrolet engines. Newgarden cemented his growing reputation by winning at Barber Motorsports Park and, having benefitted from a fortuitous yellow, in Toronto. Further second-place finishes at Iowa and Pocono followed as Newgarden, who led more laps than any other driver, challenged for the title until the final round.

Seventh overall that year, he improved to fourth in the 2016 standings despite breaking his wrist and clavicle when he crashed at Texas Motor Speedway. Third in the Indianapolis 500, he dominated on the tight confines of the Iowa Speedway to score his only win of the season.

Having impressed during his time with Fisher and Carpenter, Newgarden was chosen by Roger Penske as Juan Pablo Montoya’s fulltime replacement for 2017 and he capitalized on that promotion. He benefited when team-mate Will Power suffered a puncture to win at Barber before enjoying a consistently competitive run in the second half of the year that included further victories at Toronto, Mid-Ohio and St Louis. He took the championship lead with five races to go and defended a points slender advantage to clinch the title by finishing the Sears Point finale in second position.
Newgarden began his title defense by winning two of the opening four races (Phoenix and the red flagged Barber event). A fallow mid-season run was ended with a dominant victory at Elkhart Lake but he lost on the tight Iowa oval when his handling went awry and having pitted from second position during a late yellow. He did not score another podium during 2018 as he dropped to fifth in the final standings after an inconsistent campaign.

Newgarden remained with Team Penske in 2019 and began the season by employing a superior tyre strategy to win at St Petersburg. Second at Austin and Long Beach, he finished the Indy 500 in fourth position before winning two of the next three races to establish a points lead he would not surrender. Both of those victories in Detroit and Texas owed much to Tim Cindric’s astute strategy calls. A dominant victory followed on the short Iowa Speedway but he spun on the last lap at Mid-Ohio when disputing third position. He scored top ten finishes at the last four races of 2019 to clinch his second IndyCar Series title, denying team-mate Simon Pagenaud and Andretti Autosport’s Alexander Rossi at the final round at Laguna Seca.