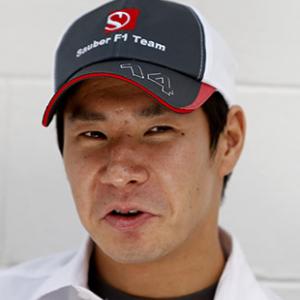 This fast and fearless racer briefly threatened to breakthrough as a Grand Prix driver although Kamui Kobayashi now races at home. Famed for his audacious overtaking manoeuvres when few would dare, standing on the podium at the 2012 Japanese GP remains his proudest moment so far.

The son of the owner of a Sushi restaurant, Kobayashi joined Japan’s one-make Esso Formula Toyota Series for a race in 2002 and finished as runner-up a year later.

With ambitions to compete at the highest level and now part of Toyota’s junior driver programme, Kobayashi moved to Europe in 2004 to race for Prema PowerTeam in Formula Renault 2.0. A winner of two Italian rounds at Misano that year, Kobayashi remained with Prema for 2005 and beat Michael Ammermüller to both the Eurocup and Italian championships.

He graduated to the 2006 Formula 3 Euroseries with ASM’s Dallara F305-Mercedes-Benz with Paul di Resta, Sebastian Vettel and Guido van der Garde as team-mates. While they fought for the title, the rookie finished on the podium three times to take eighth in the standings. He then qualified on pole position for the prestigious Macau GP and tested an F1 Toyota TF106B at Barcelona and Jerez.

Toyota announced Kobayashi as one of its F1 reserve drivers for 2007 as he continued to race for ASM in European F3. He won from pole position at Magny-Cours and finished fourth overall behind Romain Grosjean, Sébastien Buemi and Nico Hülkenberg – all F1 drivers of the future.

GP2 – Asian champion and a winner in Europe

GP2 with DAMS was next during which he won sprint races at Sepang and Bahrain to finish sixth in the 2008 Asia Series. Success in the main series was immediate for Kobayashi climbed from 13th on the grid to finish Barcelona’s feature race in eighth position and claim pole for Sunday’s sprint. Initially no match for the dominant Grosjean, he inherited victory when the Frenchman was awarded a drive through penalty. That proved a false dawn however for Kobayashi scored just two more points that season, both achieved in sprint races. That was for setting the fastest race lap at Magny-Cours and finishing sixth at Valencia.

Kobayashi remained with DAMS for the 2009 GP2 championships with form in the 2008/09 Asian Series in a marked contrast to that enjoyed during the European summer. He won successive feature races at Dubai and Bahrain to clinch the Asian title with a weekend to spare. So a solitary podium (third in the Nürburgring’s sprint race) and 16th overall was a disappointing return in the main series as his F1 ambitions appeared on the wane.

However, Toyota’s Timo Glock was injured during qualifying for the 2009 Japanese GP and Kobayashi was drafted in for a fast but furious debut in Brazil. An impressive 11th on the grid, he held off champion elect Jenson Button before forcing Kazuki Nakajima’s Williams-Toyota off the road on the fast backstretch. Criticised for his unpredictable driving style, Kobayashi nevertheless confirmed his pace during the Abu Dhabi finale by running third and finishing sixth to seemingly clinch a Toyota race contract for 2010.

Unfortunately, he was left contemplating life working in his father’s restaurant when the Japanese manufacturer suddenly withdrew from F1 that winter. BMW also quit at that time leaving its Sauber team searching for its immediate future. That proved to be a lifeline for Kobayashi who joined the Swiss concern for 2010. Although the Sauber C29-Ferrari was both slow and unreliable at the start of the season, Kobayashi was soon challenging for points and sixth at Silverstone was one of eight top 10 finishes.

Sauber’s 2011 campaign began with disappointment for Kobayashi and rookie team-mate Sergio Pérez were disqualified from seventh and eighth positions in Australia due to an illegal rear wing. Fifth in Monaco was Kobayashi’s best result of a more consistent campaign as he tamed his wild excesses somewhat.

The team kept an unchanged driver line-up for 2012 and enjoyed an upturn in fortunes. Pérez did enough to earn a call from McLaren and Kobayashi had his moments as well. Most notable were his qualifying third in China and second at Spa-Francorchamps, followed by that Japanese GP podium. He also qualified third at Suzuka and then conserved his tyres to hold off Jenson Button’s McLaren and finish third. Cue joyous scenes in the grandstands. Kobayashi finished 12th in the championship for a third successive season.

Endurance racing and his F1 swansong

That was not enough to retain his drive so Kobayashi raced an AF Corse Ferrari F458 Italia in the 2013 World Endurance Championship. Second in the GTE-Pro class on his debut at Silverstone proved to be his best result.

Kobayashi still had F1 ambitions and he joined the cash-strapped Caterham team for 2014. The Renault-powered CT05 was not fit for purpose and the team struggled at the back of the field. Kobayashi normally outperformed paying team-mate Marcus Ericsson but the chances of scoring points were negligible. Team owner Tony Fernandes tired of his investment without reward and sold Caterham before the British GP. Kobayashi was replaced by sports car star André Lotterer for the Belgian GP and the team entered administration seven weeks later. Caterham were able to return in Abu Dhabi but that proved to be the last Grand Prix for both team and driver.

Finished with F1, Kobayashi joined Team Le Mans for the 2015 Super Formula season – Japan’s senior single-seater championship. Second in round two at TI-Aida was the first of three visits to the podium as Kobayashi came sixth overall on his return to racing in his home country. He remained part of Team Le Mans’ Super Formula line-up in 2016 but it proved a lacklustre campaign – finishing no better than seventh in the final race at Suzuka.

He switched to KCMG’s Toyota-backed Super Formula team in 2017, he was second at Motegi. He repeated that race at TI-Aida in 2018 and at Sugo and Motegi in 2019. He finished sixth in the 2019 standings as a breakthrough Super Formula victory continued to elude Kobayashi.

He also joined Toyota for the 2016 World Endurance Championship and won the Fuji Six Hours with regular co-drivers Stéphane Sarrazin and Mike Conway. Another five podium finishes included coming second at Le Mans as they claimed third in the final standings.

Without a win in 2017, Kobayashi, Conway and José Maria López completed Toyota 1-2 victories at Spa-Francorchamps and Le Mans at the start of the 2018/19 “super season”. They scored back-to-back victories at Fuji and Shanghai but finished as runners-up to team-mates Fernando Alonso, Kazuki Nakajima and Sébastien Buemi as Toyota dominated.