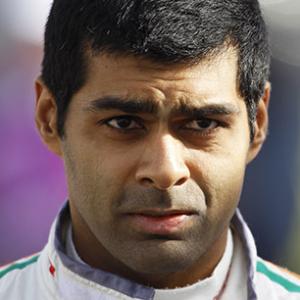 Karun Chandhok is a personable and race winning driver who fulfilled his dreams of racing in Formula 1 in 2010. However, that was with the Hispania Racing Team and subsequent experiences with Tony Fernandes’ rival concern ensured that Chandhok’s Grand Prix career was spent watching for blue flags. He has since forged a career in the media as part of BBC Radio 5 Live, Channel 4 and then Sky’s commentary team.

His father, Vicky Chandhok, is a former President of the Federation of Motor Sports Clubs of India who was considered a candidate to replace Max Mosley at the helm of the FIA in 2009.

The younger Chandhok won the Indian Formula Maruti and F2000 Asia titles during his first two racing seasons – 2000 and 2001 respectively. He then moved to England to race a T-Sport Dallara-Mugen in the national class of the 2002 British Formula 3 Championship. Third amid the category for year-old cars a year later, he graduated to the senior class in 2004 with the team’s Dallara F304-Mugen but finished no higher than fourth at Donington Park.

A season in Formula Renault 3.5 and A1GP then proved to be disappointing. However, Chandhok reminded Asian fans and sponsors of his skills by winning the 2006 Asian Formula Renault V6 Championship with ease.

A race winner in GP2

He returned to Europe in 2007 in the GP2 Series and benefited from the reversed top eight on the grid to win the Spa-Francorchamps sprint race for Durango. A 2008 move to iSport included another sprint-race victory at Hockenheim when he overtook Lucas di Grassi for the lead.rnrnTenth in the championship, he moved to Ocean Racing Technology for a largely disappointing third season in the category. He qualified fifth at Istanbul and finished third at Silverstone but those were rare highlights.

But with help from Bernie Ecclestone, Chandhok secured a last-minute F1 opportunity for 2010 with the new Hispania Racing Team. Early teething problems hampered his progress but he reacted with dignity in difficult circumstances. Fourteenth in Australia and Monaco (after Jarno Trulli had crashed into him) were his best results before being replaced after the British GP by Sakon Yamamoto.

Reserve driver for Fernandes’ Team Lotus (later Caterham) concern in 2011, Chandhok replaced Trulli for the German GP when he started and finished in 20th position. Unfortunately, a hoped-for second race in the inaugural Indian GP was scuppered when the team opted for experience as it chased 10th in the constructors’ championship.

With F1 opportunities limited, Chandhok drove a JRM Racing HPD ARX-03a in the 2012 World Endurance Championship. He took three top-six finishes, including on his debut in the Le Mans 24 Hours that year and made an annual appearance in the French endurance racing classic with Murphy Prototypes’ LMP2 ORECA-Nissan for the next three years – finishing fifth in class in 2015. He made sporadic sportscar outings until 2017 when he finished 11th overall (and ninth in LMP2) at Le Mans.

Final single-seater ambitions were limited to driving for Mahindra in the inaugural Formula E season in 2014/15. His campaign began with fifth in Beijing and sixth at Putrajaya although he did not finish in the top 10 again.

Chandhok’s outgoing personality and knowledge of the subject matter has made him a media natural. Having worked for BBC Radio 5 Live as pitlane reporter, he switched to Sky Television in 2013 and was part of Channel 4’s presentation team when it won the right to show F1 on terrestrial television in the United Kingdom from 2016, before switching back to Sky in 2019.