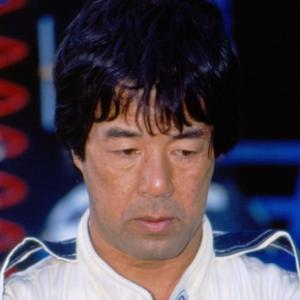 Japanese drivers are now commonplace in Formula 1 but when Masahiro Hasemi, Kazuyoshi Hoshino and Noritake Takahara started the 1976 Japanese Grand Prix they became the first such drivers to race in the world championship. That took place in a Fuji downpour and it was in similar conditions and at the same circuit that Hoshino enjoyed his brightest moment in the international spotlight some nine years later.

A winner for three decades

A star in his homeland long before that GP debut, he was regularly referred to as “the fastest guy in Japan.” Motocross champion for Kawasaki in 1968, Hoshino joined Nissan a year later for his motor racing debut.

Hoshino won the 1975 Japanese Formula 2000 Championship with a Heroes Racing March 742-BMW. That was the first of six national titles in the country’s top single-seater series with Formula 2 and F3000 success to follow. He remained competitive into the Formula Nippon era and the 48 year old won his final single-seater race in 1996 against a field that included Ralf Schumacher and Pedro de la Rosa.

He drove a Bridgestone-shod Heroes Racing Tyrrell 007-Ford in the 1976 Japanese GP and stunned F1 regulars by running third inside the first 10 laps. However, that promising run was scuppered when he ran out of wet weather tyres and he was forced to withdraw.

He returned for the following year’s race with a locally built Kojima KE009-Ford and finished 11th in his second and final GP. In addition Hoshino travelled to England to finish fourth in the 1983 Donington Park F2 race in a one-off in James Gresham’s March 832-BMW – he was no slouch in single-seaters.

Two days as the class of the sports car field

The 1985 Fuji 1000Kms was run in heavy rain and many of the regular World Sportscar Championship competitors withdrew in the early laps. Hoshino had qualified his locally-run March 85G-Nissan in third position when only beaten by the works Porsches but his race performance was remarkable. By the time the race was abandoned after two hours, Hoshino (who had driven all the way) was a lap ahead of the field.

That was not the end of international sports car success for Hoshino won the 1992 Daytona 24 Hours with a NISMO Nissan R91CP and he was third in the 1998 Le Mans 24 Hours driving a GT1 Nissan R390.

He retired in 2002 and later ran Team Impul in the Super GT Series. That concern takes its name from the aftermarket parts company that Hoshino also owns.