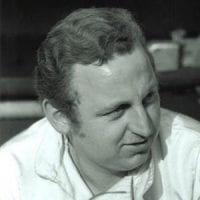 Kurt Ahrens Sr was a garage owner and scrap-metal merchant who was better known as a champion speedway rider. He turned his hand to 500cc Formula 3 in 1952 and Kurt Jr followed his father into the category six years later. They raced each other for five years during which time the younger Ahrens twice won the national Formula Junior title with a Cooper.

Controversy is followed by Formula 2 and German Grand Prix appearances

It was not all success however, for Ahrens Jr was banned for six months in 1962/63 after suspicions that his engine was too large. He raced a Cooper T67-Cosworth in Formula 2 during 1964 – finishing fifth in the Eifelrennen and impressing at Zolder.

He switched to a Brabham BT16 for the following season (when fifth at Solitude) and made his Grand Prix debut in the F2 class of the 1966 German GP. His Caltex-sponsored Brabham BT18-Cosworth retired that day and it was a repeat result in the 1967 race when driving Ron Harris’s wooden-chassis Protos-Cosworth.

A full F2 season followed in 1968 with a privately entered Brabham BT23C-Ford and he delighted locals by leading the non-championship Eifelrennen at the Nürburgring before finishing in a fine second. Third in a European Championship event at Járama, he was 12th in his only championship start in a Formula 1 car after hiring a Brabham BT24-Repco for that year’s German GP. His fourth and final GP start was in the race’s F2 category once more – Ahrens’ Brabham BT30-Cosworth third in class in 1969.

However, his competitive instincts were increasingly being tested in sports car racing. He joined Porsche in 1968 and was second in that year’s sports car Austrian GP at Zeltweg. The race relocated to the nearby impressive new Osterreichring in 1969 and Ahrens shared the winning Porsche 917 with Jo Siffert.

Further podium finishes at Sebring, Monza, Spa-Francorchamps and the Nürburgring illustrated his quality in this form of racing. He was Vic Elford’s co-driver for 1970 and they won the Nürburgring 1000Kms with a Porsche 908/3 – the first victory for the Porsche Salzburg team.

That proved to be Ahrens’ final season in the sport as he took on increased responsibility in the family business.