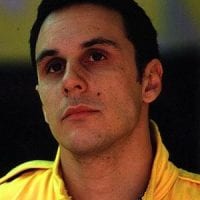 With touring car titles in three different countries, Laurent Aïello can claim to be one of that discipline’s recent stars. He also won the endurance classics at Le Mans and Sebring to cap a fine professional career.

Aïello followed the well-trodden route through single-seater’s junior categories at first and won the 1990 Monaco Formula 3 race when rain accounted for some of the pre-event favourites.

The next two seasons were spent in the FIA Formula 3000 Championship. The 1991 season was blighted by the recalcitrant Lola T91/50-Mugen although he did outscore his more experienced DAMS team-mate Allan McNish thanks to a third place finish at Spa-Francorchamps. Aïello joined reigning champions Pacific Racing for 1992 with continued Marlboro support. He retired while his Reynard 92D-Mugen was running third in the opening race and things only got worse – gathering a meagre three points all season. The Frenchman was Jordan Grand Prix’s test driver for two seasons but his single-seater ambitions were effectively over.

Success in touring cars and at Le Mans

His rebirth as a touring car driver however could not have been more successful – his ORECA-run works Peugeot won the 1994 French Supertourisme and 1997 German 2-litre titles.

His Le Mans debut in 1998 was sharing the winning works Porsche 911 GT1-98 with McNish and Stéphane Ortelli and his next three appearances in the race resulted in fourth, second and second in successive years driving for Audi. It was some record.

During that time, Aïello also raced in the British Touring Car Championship which he won in 1999 for Nissan. A move to the DTM with Abt Sportsline and Audi also ended in almost inevitable title success in 2002. Aïello continued in the series for another three seasons before retiring from the sport at a surprisingly early age.