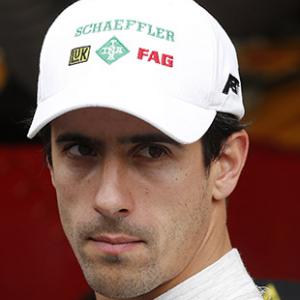 Lucas di Grassi drove for Virgin Racing in the 2010 Formula 1 World Championship and was a race winner in sports cars. But it is in the all-electric Formula E Championship that he has emerged as a consistent title challenger.

He began in karts when 10-years-old before switching to cars in 2002 when he finished as runner-up in the Brazilian Formula Renault Championship. He moved into Sud-Am Formula 3 for the following season with an Avallone Motorsport Dallara F301-Mugen. Again he finished second despite missing the final six races after injuring his neck at Curitiba.

He had also made his European F3 debut that year and was fourth at Pau for Prema Powerteam. He switched to the British series in 2004 with a HiTech Racing Dallara F304-Renault. Impressive in qualifying, he scored a double win at Thruxton and finished third at Macau.

For 2005 he graduated to the Euroseries with Manor Motorsport but he suffered a major accident at the opening round. Di Grassi recovered to win at Oschersleben and clinch third in the championship behind ASM stars Lewis Hamilton and Adrian Sutil. Third in the Zandvoort Masters, he won at Macau to attract the attention of the Renault Formula 1 team. He joined its young driver development scheme and tested a Renault R25 at Jerez.

GP2 was next but having accelerated through the training formulae, di Grassi would spend four years a step away from F1. A disappointing 2006 with Durango was followed by a move to reigning champions ART Grand Prix. Although unable to match iSport’s Timo Glock, the Brazilian proved an intelligent racer and finished runner-up in the 2007 championship – something he was becoming used to.

Renault’s reserve driver in 2008, di Grassi made a delayed return to GP2 when replacing Ben Hanley in Adrián Campos’ Barwa International team. Despite missing the opening six races, he won three times to close to within a point of finishing second once more. Third again in 2009 (now with Racing Engineering), he was overlooked when Renault decided to replace the disappointing Nelson Piquet Jr.

However, his F1 opportunity finally came in 2010 with the Manor-run Virgin Racing. Life among F1’s new teams was far from easy and 14th in Malaysia was di Grassi’s best finish of an underwhelming campaign. Generally outpaced by team-mate Glock, he was replaced at the end of the season.

Starring for Audi in sports cars

He spent 2011 as test driver for Pirelli before starring on his World Endurance Championship debut at Interlagos in 2012. Sharing an Audi R18 ultra with Allan McNish and Tom Kristensen, di Grassi set the fastest race lap as they finished third. He shared an Audi R18 e-tron quattro with Oliver Jarvis and Marc Gené for the 2013 Spa-Francorchamps Six Hours and at Le Mans – finishing third on both occasions. He was also second at Sebring with Kristiansen and McNish. He replaced the retiring Scot in 2014 and three second place finishes included that year’s Le Mans 24 Hours.

Di Grassi continued to improve during the 2015 WEC season although Audi were ultimately not as quick as either Porsche or Toyota. The Brazilian impressed at Le Mans on the way to fourth and finished third at the Circuit of the Americas as he, Loïc Duval and Oliver Jarvis claimed fourth in the final standings.

2016 proved to be di Grassi’s breakthrough sports car campaign with victories at Spa-Francorchamps and Bahrain among the highlights. Again paired with Duval and Jarvis, they were only beaten in the championship by the Porsche of Romain Dumas, Marc Lieb and Neel Jani. However, Audi withdrew at the end of the season so di Grassi concentrated on his burgeoning career in the all-electric Formula E Championship.

The Brazilian won the very first Formula E race around Beijing’s Olympic stadium in 2014, benefiting when Nicolas Prost and Nick Heidfeld collided at the final corner of the race. He scored another five podium finishes during that inaugural 2014/15 campaign to finish third overall for Audi Sport Team Abt.rnrnHis second season with Abt so nearly delivered the Formula E title but ended in controversy. He won in Putrajaya, Long Beach and Paris but lost victory in Mexico when his car was found to be underweight. His title challenge was further harmed by team-mate Daniel Abt’s refusal to yield second place in Berlin despite being told to do so. Di Grassi held a narrow championship lead entering the final race in London and drove into rival Sébastien Buemi on the opening lap. Whether deliberate or not, he could not better Buemi’s fastest race lap so the Swiss driver emerged as 2015/16 champion by the narrowest of margins.

The same two drivers contested the Formula E title in season three. Buemi won the opening three races of the 2016/17 season with di Grassi on the podium at Hong Kong (from last on the grid) and Buenos Aires (from pole position). Di Grassi dropped to the back of the field in México City when he lost his front wing but took advantage of a safety car to leap to the front and score his first victory of the season. On the podium for three of the next four races while Buemi continued to win, di Grassi crashed in Paris as his title chances appeared to wane. Fourth in New York’s race one, di Grassi converted pole position for the opening race of Montréal’s deciding weekend into another victory. With Buemi not scoring in either race, di Grassi’s conservative race into seventh in race two was enough to snatch the Formula E title from his rival.

Named as CEO of the new Roborace series for autonomous cars in September 2017, di Grassi endured a terrible start to his title defence. He did not score a point in the opening four races of the 2017/18 campaign, a run that included colliding with Buemi at round one. He then finished in the top two at the final seven races of the season – a Formula E record for consecutive podium finishes that included back-to-back victories in Zurich and New York (race one). Having controversially denied Audi team-mate Abt in that latter race, di Grassi claimed second in the standings with yet another second-place finish in race two.

Di Grassi again won twice during the 2018/19 Formula E season but accidents and inconsistencies harmed his title bid. He snatched victory in México City when Pascal Wehrlein ran out of energy on the last lap and was second in Hong Kong. Winner of Audi’s home race in Berlin, di Grassi faded to third overall after collisions in Monte Carlo and on the last lap of New York’s second race.

The following season was the first of his Formula E career in which he failed to take a single victory, with a sixth-place finish in Diriyah his best result of the year.