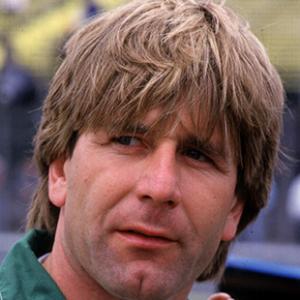 The older of the Winkelhock brothers was a wild and impetuous driver who never failed to entertain.

Friends persuaded Manfred Winkelhock to race in 1976 rather than frighten them in his road car. That was in the Volkswagen Scirocco Cup and he ended the year as champion. It was his performance in a celebrity race that year, in which he beat a field of better known German drivers, which led to a call from Jochen Neerpasch and a BMW junior contract. He drove for the marque in touring cars before joining the works March-BMW team for the 1978 Formula 2 season.

Third at the Nürburgring on a one-off in Manfred Cassani’s Ralt RT1-BMW in 1979, he returned to March for 1980. He gained as much fame for a spectacular end-over-end flip at the Nürburgring that year as he did for his results although he did again finish third at Enna-Pergusa.

He replaced the injured Jochen Mass for that year’s Italian Grand Prix but failed to qualify an Arrows A3-Ford. Armed with Bertram Schäfer’s Ralt RT2-BMW, he almost won the 1981 Hockenheim F2 race only to be passed by Stefan Johansson on the penultimate corner. He switched to a Maurer MM81-BMW and qualified on pole position at Donington Park that year before finishing third.

Formula 1 with ATS, Brabham and RAM

That was his final F2 season for he joined ATS for the 1982 F1 World Championship. He finished fifth in Brazil and qualified in that position in Detroit on rare days in the sun.

BMW supplied turbocharged engines to ATS for Winkelhock’s second season. He was fast in qualifying (starting nine races in the top 10) but the combination was fragile and failed to score a point. That pattern continued in 1984 and, after a one-off drive in a Brabham BT53-BMW at the end of the season, Winkelhock’s association with BMW ended.

He drove for RAM-Hart in 1985 but he was scarcely more competitive and again failed to score. His fifth position in the 1982 Brazilian GP – his second race in the category – was his only points finish from 47 starts.

Winkelhock combined F1 with sports cars throughout that time. He scored a fortunate victory at the 1985 Monza 1000Kms when a tree blocked the track and stopped the race at an advantageous moment for his Kremer Porsche. Less than four months after his highest profile victory, Winkelhock crashed at Mosport Park’s Clayton Corner during the World Sportscar Championship race. Airlifted to hospital in Toronto with severe head injuries, he died on the following day.