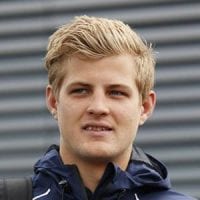 Marcus Ericsson was a race winner throughout his career in the junior formulae and 2009 Japanese Formula 3 Champion, although it was a surprise when he graduated to Grand Prix racing. Steady rather than spectacular for Caterham during his rookie campaign in 2014, he spent the following four seasons with Sauber with little reward.

Hailing from the same region as the ultimate Swedish racing hero Ronnie Peterson, he began racing karts seriously when nine years old. With both Eje Elgh and Kenny Bräck as mentors, Ericsson joined Fortec Motorsports for the 2007 Formula BMW UK Championship. He won seven times as the teenager beat Josef Král to the title in his first season racing cars.

He remained with Fortec for the 2008 British F3 Championship when driving a Dallara F308-Mercedes-Benz. However, the team was unable to match Carlin Motorsport for whom Jaime Alguersuari and Oliver Turvey finished first and second overall. The Swede did register two pole positions and five top three finishes on the way to fifth in the points.

Ericsson moved to the Japanese series in 2009 with Petronas Team TOM’s. On pole for his debut, he won five times to clinch the title against an admittedly thin field. Occasional British F3 Championship outings that year for Robertson Räikkönen Racing were a more competitive test of Ericsson’s potential so victories at Rockingham and Hockenheim were welcome. Back in his regular TOM’s Dallara F308-Toyota for Macau, he qualified on pole before finishing fourth against the best F3 talent of the year. 2009 also included Ericsson’s first F1 experience, completing three days of F1 testing for new World Champions Brawn Grand Prix at Jerez.

However, disappointing outings with ART Grand Prix and then Super Nova Racing followed in the 2009/10 GP2 Asia Series but Ericsson remained with the latter for the main GP2 Series in 2010. It proved to be a mixed campaign although he did translate his front row start (thanks to the top eight grid positions being reversed) into victory in Valencia’s sprint race. He only scored twice more and finished a disappointing 17th overall.

Ericsson moved to iSport International for the curtailed 2010/11 GP2 Asia Series. A couple of top four finishes during Abu Dhabi’s opening weekend saw him finish sixth in the four-race championship. He remained with iSport for the summer series and was third at Barcelona (sprint race) and Silverstone (feature) although 10th in the points represented a lacklustre return.

Another season with iSport followed in 2012 and that campaign included winning the crash-interrupted Spa-Francorchamps feature race – his first victory in more than two seasons. However, it had been a story of “feast and famine” once more and the Swede’s career appeared to have stagnated despite him being just 22 years old.

Ericsson joined reigning champions DAMS for his fourth GP2 season and was expected to challenge for the 2013 title. He suffered a frustrating start to the campaign and did not finish in the top 10 until mid-season. Feature race victory at the Nürburgring proved the highlight and another four visits to the podium followed as Ericsson finished sixth in the championship.

Despite four largely underwhelming years in GP2, Ericsson graduated to Formula 1 in 2014 with Caterham. The Caterham CT05-Renault was as slow as it was ugly and the season was further blighted by the team’s financial troubles. Although unable to match more experienced team-mate Kamui Kobayashi for much of the year and having crashed too often, Ericsson finished 11th at Monaco to equal Caterham’s best F1 finish. The team entered administration and missed the United States and Brazilian GPs before returning for the final race. By that time, Ericsson had severed his ties with Caterham as he worked on securing his F1 future.

He joined Sauber for 2015 but legal action from Guido van der Garde dominated the opening race in Australia – the Dutchman having also signed for the beleaguered Swiss team. That was eventually settled out of court and rookie team-mate Felipe Nasr and Ericsson finished that race in fifth and eighth respectively as Sauber scored its first points in over a year. The Swede qualified ninth two weeks later in Malaysia – his best F1 grid position to that date. Ericsson scored further top 10 finishes at three mid-season races in-a-row as he came 18th in the final standings.

The team’s financial woes continued in 2016 and, despite generally outperforming Nasr, Ericsson was never quite able to coax his Sauber C35-Ferrari into the points. It was a similar pointless season in 2017, 11th place in Spain and Azerbaijan his best results of the season. The closest he came to scoring was on the streets of Baku where he was ordered to let team-mate Pascal Wehrlein take 10th for fear of losing that position to the fast closing McLaren-Honda of Stoffel Vandoorne.

He was joined by Formula 2 Champion Charles Leclerc in 2018 and spent his final F1 season racing in the rookie’s shadow. Ericsson did score points on six occasions in a much improved season for the team but while Leclerc earned promotion to Ferrari, the Swede was replaced by Kimi Räikkönen at the end of the season.

Ericsson turned down the opportunity to remain with the rebranded Alfa Romeo Racing (Sauber) as fulltime reserve driver in 2019 preferring to switch to the IndyCar Series with Schmidt Peterson Motorsports instead. The team struggled and second in race two at Detroit was a rare highlight for the Swede. Ericsson set the fastest race lap in Toronto and missed the penultimate round at Portland when an unused substitute at the Belgian GP in case Räikkönen did not recover from a muscle strain. 17th overall was an underwhelming return from his first Indycar campaign.

Ericsson moved across to Chip Ganassi Racing for the 2020 IndyCar season. He improved to 12th in the championship in his second season in the U.S. and signed a multi-year extension with CGR.