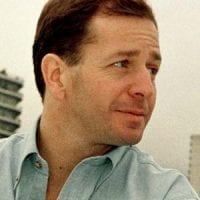 To a new generation, Martin Brundle is first and foremost a commentator whose deep knowledge and straightforward analysis brings an extra perspective to grands prix.

His natural ability at the mic only emerged towards the end of his time racing in Formula 1; another unexpected step in an unorthodox career path.

Brundle is the son of a Norfolk motor trader who had competed in rallies and rallycross. He started in grass track racing with a Ford Anglia during 1971 and he switched to short-track hot rods four years later – he is a rare modern Formula 1 driver who did not graduate through karting.

For his circuit racing debut, Brundle chose the British Touring Car Championship and an old Toyota Celica. The teenager caught the eye and he made his first steps into single-seaters in Formula Ford 2000 during 1979. Not that he abandoned saloons – winning the 1980 BMW County Championship for Norfolk and then Audi team-mate to returning veteran Stirling Moss in the 1981 BTCC.

His career really caught fire in 1983 when Ayrton Senna’s chief adversary in Formula 3. True, the mercurial Brazilian won the opening nine rounds but Brundle stood resolute and took the title fight to the final round. In all, Brundle won seven races in Eddie Jordan’s Ralt RT3-Toyota and enhanced his reputation immeasurably.

Both drivers jumped straight into F1 in 1984 with the Englishman driving a Tyrrell 012-Ford. Pitted against the might of the turbo teams, he finished a fine fifth on his debut in Brazil before crashing spectacularly during practice at Monaco. An impressive second at Detroit, Brundle crashed again while qualifying at Dallas and broke both his ankles. That ended his promising campaign and his efforts would eventually count for nothing. A fuel sample taken from his Tyrrell in Detroit was found to be illegal and the team was excluded from the 1984 championship with all results to date stricken from official records.

He remained with Tyrrell for the next two seasons but did not repeat his exuberant rookie displays – a lapped fourth in the 1986 Australian Grand Prix was his best finish for the team. 1987 with Zakspeed was a disaster (fifth position at Imola his only points score) and Brundle was forced to sports cars and Jaguar in search for a competitive car.

Sports car success and the return to F1

He won both the World Sportscar Championship and Daytona 24 Hours for Tom Walkinshaw’s squad during 1988 and he was seventh in the Belgian GP in a one-off replacing the ill Nigel Mansell at Williams. Brundle spent 1989 back in F1 with Brabham and would have finished third in Monaco but a pitstop to change a faulty battery dropped him to sixth. The season was hampered by the team’s financial uncertainty and so he returned to Jaguar for the following season. The highlight of 1990 was victory in the Le Mans 24 Hours when Brundle made a late switch to the winning Jaguar XJR-12 after his own car had retired.

With new owners and a works Yamaha engine deal, Brabham persuaded Brundle to rejoin for 1991 but fifth in Japan was his only top-six finish. 1992 was the year when Brundle finally had an F1 car in which he could win but unfortunately his team-mate that year was Michael Schumacher.

Walkinshaw was now managing Benetton’s F1 operation and it was Brundle’s most successful season in the category – finishing sixth in the world championship and almost winning in Canada. But comparison to the brilliant young German was inevitable and unfavourable.

Further seasons with Ligier (1993 and 1995), McLaren (1994 during its fallow Peugeot-powered campaign) and Jordan (1996) were those of a driver on the way down. There were moments when Brundle was centre stage – finishing second for McLaren in the 1994 Monaco GP, crashing into a Japanese marshal later that year and barrel-rolling on the opening lap of the 1996 Australian GP – but Brundle had a decision to make.

He retired from F1 to accept an offer from ITV Television to join its new commentary team. It was immediately obvious that he was a natural behind the microphone and his pre-race grid walks became a signature element of his burgeoning broadcasting reputation. Brundle transferred, first to the BBC when it won the broadcast rights, and then to Sky in 2012.

Aside from television, Brundle ran 2MB Sports Management with Mark Blundell before selling his stake to his former Brabham team-mate in 2009. He also negotiated David Coulthard’s driver contracts during the latter years of the Scot’s career and he served as Chairman of the British Racing Drivers’ Club from 1999 to 2003.

Brundle has never quite retired from racing, making occasional returns alongside his broadcast career. He returned to the Le Mans 24 Hours in 2012 when 15th overall with Greaves Motorsport’s Zytek Z11SN-Nissan, his son Alex and Lucas Ordóñez. He finished second in the GT3/LMP3 race that supported the 2016 event with United Autosport’s Ligier JSP3-Nissan.

Brundle was inducted into the Motor Sport Hall of Fame in 2020.