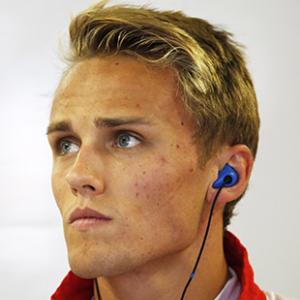 The younger son of insurance magnate Grahame Chilton, this personable Englishman spent two seasons making up the numbers in Formula 1 with Marussia. A finisher of every race of 2013 during his debut season, it is no disgrace that he was generally outperformed by team-mate and Ferrari protégé Jules Bianchi during that time.

Educated at the Ardingly College private school, Max Chilton followed older brother Tom into karting when 10 years old. In addition to continued outings in that discipline during 2005, he raced in cars for the first time when competing in the BRSCC T-Car saloon car series for 14 to 17 year olds. He won seven times during 2006 to finish as championship runner-up behind Luciano Bacheta.

Chilton made the ambitious step up to British Formula 3 in 2007 when driving a Dallara F307-Mercedes-Benz for Mike Earle’s Arena International Motorsport. He could only join the series at round three – the day after his 16th birthday when he qualified for the necessary licence. Understandably, it was a learning year with Chilton’s best result being 11th at Snetterton and Brands Hatch. He also made his sports car debut during 2007 when sixth in the Silverstone 1000Kms, sharing Arena’s LMP1 Zytek 07S with his brother.

He moved to new F3 champions HiTech Racing in 2008 and showed an improvement – finishing second behind Oliver Turvey in Oulton Park’s opening round. He recorded back-to-back pole positions at Monza and Rockingham and was third in the second race at the latter. It was a mixed campaign as the youngster learned his trade that ended with Chilton 10th overall.

His father’s Capiscum Motorsport Group acquired reigning F3 champions Carlin, and his son joined the team for 2009 as part of a four car line-up that included eventual champion Daniel Ricciardo. Consistent all year long (a trait that would mark his maiden F1 season four years later), Chilton qualified on pole position four times and won the final round at Brands Hatch to seal fourth in the championship.

He graduated to GP2 in the 2009/10 Asian Series with Barwa Addax Team. However, it was on a one-off with Ocean Racing Technology at Abu Dhabi’s February 2010 meeting that Chilton scored his first points – finishing in eighth and sixth positions. He remained with Tiago Monteiro’s team for 2010’s main championship but normally qualified outside of the top 15 (eighth at Abu Dhabi his only top 10 qualifying performance). 23rd on the grid for the feature race at Monza, he finished eighth after accidents eliminated almost half of the field. Chilton then converted the resulting pole position into a GP2 career-best fifth place finish in Sunday’s sprint race.

Carlin entered GP2 for the first time in 2011 so it was no surprise that Chilton was part of its line-up for his sophomore GP2 season. He qualified seventh at Monaco before finishing seventh and sixth that weekend. Silverstone provided his best qualifying position (fifth) and Chilton climbed from 17th to sixth in the Nürburgring sprint race. The year ended with Chilton enjoying two days driving a Force India VJM04-Mercedes in the Abu Dhabi F1 rookie tests.

He remained with the now Marussia F1 supported Carlin squad for the 2012 GP2 Series and he regularly qualified in the top 10. Third at the finish of the opening round at Sepang, he qualified second on the streets of Monte Carlo before finishing that weekend’s sprint race in that position. He then qualified on pole position for Hungary’s feature race and withstood Davide Valsecchi’s pressure to score his breakthrough GP2 victory. Another feature race win followed in Singapore as Chilton came fourth overall and Chilton was Marussia’s Friday test driver at that year’s Abu Dhabi GP.

Chilton joined Marussia for the 2013 F1 World Championship in what was always going to be a tough baptism. Despite the team struggling at the wrong end of the grid, Chilton’s Marussia MR02-Cosworth finished every race (a new record for a rookie) with 14th in Monaco his best finish. Although outpaced by fellow newcomer Bianchi he was far from embarrassed by the quick Frenchman.

He remained with the now Ferrari-powered Marussia team for 2013 but lost that perfect reliability record when he crashed with Bianchi on the opening lap in Canada. There was confusion in Belgium when the team announced that he was being replaced by Alexander Rossi only for Chilton to race on after an abrupt U-turn. 13th in the Australian and Bahrain GPs were the best results of his F1 career as the team struggled both financially and on the track. Worse still, Bianchi suffered serious injuries during the Japanese GP. Furthermore, the team went into administration after the following Russian GP and although it would restructure and rise again, Chilton’s F1 career was over.

Racing in America and at Le Mans

With Carlin expanding into American single-seater racing, Chilton stepped back into Indy Lights for the 2015 season. Bianchi finally succumbed to his injuries in July, so it was an emotional Chilton who led a Carlin 1-2 at Iowa Speedway two days later. That was Chilton’s only win that year as he finished fifth in the final Indy Lights standings. He also raced in the Le Mans 24 Hours for the first time but the experimental front-wheel-drive Nissan Nismo GT-R LM proved less than competitive and retired.

Chilton graduated to the IndyCar Series with Chip Ganassi Racing in 2016 and finished seventh in round two on the one-mile Phoenix oval. He qualified fourth at Iowa and was 19th in the final standings. Chilton’s second season with Ganassi included six top ten finishes as he improved to 11th overall. His best performance came in the Indianapolis 500 where he led for 50 laps and finished fourth. Ganassi slimmed down to two cars for the 2018 season so Chilton switched to newcomers Carlin – 11th in the second race at Detroit his best finish of a difficult campaign.

He continued with Carlin in 2019 but gave up racing on ovals after failing to qualify for that year’s Indianapolis 500. Chilton continued to struggle and another 11th place finish at Portland was his best finish once more.