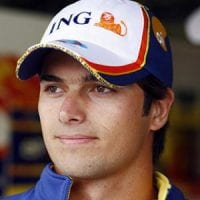 Nelsinho Piquet followed his championship-winning father and graduated to Formula 1 in 2008. However, his season and a half at that level are best remembered for subsequent revelations.

Like every second-generation racing driver, he benefited from his famous name but forever suffered comparison to his kin. The son of three-time world champion Nelson Piquet, he was brought up in Monte Carlo by his estranged mother and only moved to Brazil to be with his father when eight years old.

The young Piquet soon began karting and set out on a career in racing. The Piquet Sports team was established for his graduation to cars in the 2001 Sud-Am Formula 3 Championship. Champion in his second season in the category, Piquet switched to British F3 in 2003. Again, Piquet won the title at his second attempt to become the youngest champion to that date.

He graduated to GP2 in 2005 with the family team run in conjunction with HiTech Racing. Victory in the feature race at Spa-Francorchamps was one of five podium finishes and Piquet was eighth in the final points. He also represented Brazil in the A1GP World Cup of Motorsport and won both races in the inaugural meeting at Brands Hatch but had limited success thereafter.

His second season in GP2 was a year-long title dogfight with Lewis Hamilton. The Englishman eventually triumphed at the Monza finale but Piquet showed he was also a star of the future by finishing as runner-up.

Piquet had flirted with F1 as long ago as 2004 – testing a Williams-BMW that year and for BAR-Honda in 2005. He signed for Renault as its reserve for 2007 and he was promoted to race driver as Fernando Alonso’s 2008 team-mate. Fast and with a confidence that bordered on arrogance, Piquet endured a difficult rookie season. However, a one-stop strategy from the back of the grid at Hockenheim and the timely safety car period yielded a surprise second place finish.

Retained for a second season, he failed to match performance clauses in his contract and the Brazilian was released following the Hungarian Grand Prix. He did not go quietly however.  Piquet confessed to the FIA that he had crashed deliberately during the 2008 Singapore GP. That triggered a safety car that handed team-mate Alonso a tactical advantage which he translated into a surprise victory. Piquet’s F1 career was over and Renault’s Flavio Briatore and Pat Symonds were both banned for their part in the race-fix scandal.

Piquet switched his attention to America and raced in stock car racing’s junior categories as he rebuilt his reputation. Victory in both the Truck (at Michigan and Las Vegas) and second-tier Nationwide Series (from pole position at Elkhart Lake) certainly demonstrated solid progress during 2012.

He joined China Racing for the inaugural Formula E season in 2014/15 and won at Long Beach and Moscow. He then finished the final race in London’s Battersea Park in seventh position to snatch the title by a single point. Unfortunately, the team’s technical package for the 2015/16 season was off the pace so a sustained title defence proved impossible. Piquet slumped to 16th in the final standings with eighth in Putrajaya his best result.

He also made his debut in the World Endurance Championship during 2016 when sharing Rebellion Racing’s LMP1 prototype with Nick Heidfeld and Nico Prost in three events. Delayed by an early clutch change at Le Mans, they finished fourth at both Silverstone and Spa-Francorchamps.

Formula E’s season three (2016/17) began with Piquet’s Nextev TCR002 on pole position in Hong Kong but he crashed while leading. Fifth in Buenos Aires and fourth in Monaco, his race performances were hindered by an inefficient powertrain. 11th in the championship, Piquet signed to lead the Jaguar team in 2017/18. He scored three fourth-place finishes but a run of five retirements in six races limited him to ninth overall. Worse was to come in 2018/19 for Piquet was replaced by Alex Lynn after six lacklustre outings that culminated in Piquet crashing out of the Sanya ePrix.