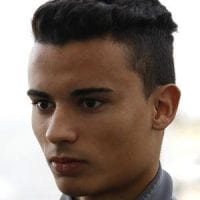 With a German father and Mauritian mother, the Mercedes-Benz-backed Pascal Wehrlein became the youngest DTM champion so far in 2015 before spending two seasons at the wrong end of the Formula 1 grid. Mentioned as a possible replacement for Nico Rosberg after the new champion suddenly retired at the end of 2016, has since slipped from the F1 grid and now races in Formula E.

Having raced karts in his native Germany since 2003, the 15-year-old Wehrlein made his car racing debut in the 2010 ADAC Formel Masters Championship when driving for Mücke Motorsport – the team he would drive for during much of his formative years. He was third in race one of the Oschersleben and Sachsenring weekends at the start of the season, and completed that second round by scoring his first victory. On pole position when the series visited Assen, Wehrlein finished sixth in the final standings.

Wehrlein remained with the team for 2011 and battled Englishman Emil Bernstorff for the title. He won eight times (including five mid-season races in a row) and clinched the title during the Hockenheim finale.

GP3 tests for Mücke followed with the team but it was in European Formula 3 that Wehrlein raced in 2012. Driving a Mücke Dallara F312-Mercedes-Benz in that year’s sparse field, he lost a breakthrough victory at the Norisring when punted into the air by title rival Daniel Juncadella. Wehrlein scored consistently thereafter, including winning race two at the Nürburgring to challenge the Spaniard throughout the F3 EuroSeries. Runner-up in those standings, he was fourth in both the newly reintroduced FIA European F3 Championship and end-of-season Macau Grand Prix.

The teenager replaced the retiring Ralf Schumacher in the Mercedes-Benz line-up for the 2013 Deutsche Tourenwagen Masters. The youngest driver to start a DTM race to that date, his RSC Mücke Mercedes-Benz C-Coupé lined-up fifth on the grid at the Norisring, and Wehrlein scored three tenth–place finishes during as he completed a low-key rookie season in 22nd overall.

He was promoted to the senior HWA squad for his second DTM season but 2014 was marred by an incident during a promotional event in Italy. Wehrlein and Nico Rosberg were giving passenger rides to the German football squad ahead of that year’s World Cup when his car hit two people who had strayed onto the circuit. That said, he made great strikes on the track – converting pole position at the Lausitzring to become the youngest DTM race winner so far, and he improved to eighth in the championship. He completed the year by making his F1 debut in the Abu Dhabi rookie test session – his Mercedes-Benz W05 quickest of all on November 26.

His development continued in 2015 with Wehrlein named as reserve driver for the dominant F1 team in addition to completing a successful third season in the DTM. He scored points in 15 of the 18 championship rounds and that consistency, allied to victories at the Norisring and Moscow Raceway, eventually delivered the title. One points finish that was lost came in the wet second race in Austria when Mercedes drivers Wehrlein and Robert Wickens spun on the final lap after contact with Audi’s Timo Scheider, moments after the latter was told (in German) over the radio to “push him out”.

Formula 1 with Manor and Sauber

The youngest DTM champion in history, Wehrlein was rewarded by an F1 drive with the now Mercedes-powered Manor Racing Team. He finished 10th in Austria to deliver the team’s second points finish so far and made it through Q1 on five occasions.

Nico Rosberg’s shock retirement briefly led to rumours of promotion to the prize Mercedes-Benz drive but Wehrlein joined Sauber in January 2017. Considered too inexperienced to step up to the works team, Wehrlein injured his back in the Race of Champions and consequently missed the opening two GPs of the 2017 F1 season. The package of the Sauber C36 and year-old Ferrari engine was the slowest in the 2017 field but Wehrlein out-qualified team-mate Marcus Ericsson 11-7 and one-stopped to an eighth-place finish in Spain. That could have been better for he received a five second penalty for a pit violation that handed seventh to Carlos Sainz. Wehrlein then rolled out of the Monaco GP at Le Portier after being hit by Jenson Button’s McLaren-Honda and survived the mayhem in Azerbaijan to finish 10th.

Return to the DTM

Unfortunately, Sauber’s partnership with Alfa Romeo in 2018 included a place for Ferrari junior driver Charles Leclerc. Without an alternative F1 opportunity, Wehrlein returned to the DTM with AMG Mercedes once more. He came third in the second race at the Lausitzring and finished eighth overall in what was Mercedes-Benz’s final season in the DTM before it switched to the all-electric Formula E single-seater series.

Overlooked for the Mercedes-backed HWA squad for the 2018/19 Formula E season, the 25-year-old joined Mahindra Racing instead. The German rookie impressed at the start of the season and finished second in the heat of Santiago de Chile. He qualified for the next race in México City on pole position and lead from the start until running out of energy on a frenetic last lap. Pipped on the line, he dropped to sixth position in the results due to a post-race penalty for cutting the chicane. Unfortunately, neither driver nor team would hit those heights again. Fourth in Monte Carlo was Wehrlein’s only other top five finish as he faded to 12th in the final Formula E standings. He slumped to 18th in the championship in the 19/20 season with Mahindra, and did not take part in the final six races of the season after signing with Porsche for the following year.