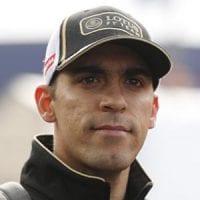 Pastor Maldonado is a former GP2 Series champion who also won the 2012 Spanish Grand Prix. That surprising if fully deserved Barcelona victory apart, much of his single-seater career was marred by controversy and contact with others. Having lost his place on the Formula 1 grid, Maldonado eventually returned in the World Endurance Championship.

The son of an amateur racing driver, Maldonado graduated from karts to Italian Formula Renault 2.0 in 2003 with Cram Motorsport. He won the winter series at the end of the year and remained with the team to add the Italian title a year later – winning eight times in a field that included Kamui Kobayashi, Luca Filippi and Davide Valsecchi. He also won the opening two rounds of that year’s Eurocup at Monza but faded to eighth overall. 2004 ended with Maldonado testing a Minardi PS04B-Cosworth at Misano.

Now a Renault junior driver, the Venezuelan joined DAMS for the 2005 Formula Renault 3.5 season. However, that proved to be a controversial campaign and he was banned for four race weekends following an incident at Monaco. He ignored yellow flags waved at Massenet during Thursday practice and struck a marshal who was tending to Patrick Pilet’s crashed car. Rather than remain inactive during his enforced absence, Maldonado drove a Sighinolfi Autoracing Lola B2/50-Zytek in four Italian Formula 3000 races – winning at Magione.

Maldonado moved to Draco Multiracing USA for the 2006 F.Renault 3.5 season despite having lost the French manufacturer’s backing in the wake of his Monaco incident. It was a far more satisfying campaign and he returned to winning ways around the streets of the Principality. He won another three rounds on the road although his car failed scrutineering after winning at Misano. Draco protested unsuccessfully and rather than win another title, Maldonado was eventually relegated to third in the final points.

With ample sponsorship from state owned Venezuelan oil company PDVSA, he joined Trident Racing for his GP2 debut in 2007. Off the pace during the opening two race weekends, he converted a surprise pole position into another victory at Monte Carlo. He also finished second in the Silverstone sprint race but missed the Hungarian rounds while recovering from breaking his collarbone while cycling.

Maldonado joined Piquet Sports for 2008 and began the year from pole position in Spain. He repeated that feat at Monaco – coming second in what was the first of six podium finishes. Fifth in the championship, his personal highlight came at Spa-Francorchamps where Maldonado passed Jérôme d’Ambrosio on the last lap to win the sprint race.

Now in his third GP2 season, much was expected of Maldonado in 2009. He moved to the crack ART Grand Prix and won the Monaco and Silverstone sprint races. However, he crashed too often and while team-mate Nico Hülkenberg won the championship, Maldonado was an overshadowed sixth at the end of the year.

With Nelson Piquet no longer involved, Maldonado returned to the now renamed Rapax team for his must-win 2010 GP2 campaign and he did not disappoint. Second at Monaco once more, he won the next six feature races to secure a deserved championship at the fourth attempt. Formula 1 was next and Maldonado impressed while testing for both HRT and Williams during the post-season Abu Dhabi young driver tests.

He replaced Hülkenberg at Williams for the 2011 F1 season with his substantial sponsorship fund certainly a factor. There were moments of promise – most notably running sixth at Monaco before Lewis Hamilton crashed into him at Ste Devote – but tenth at Spa-Francorchamps provided the only point of Maldonado’s difficult debut campaign.

He was challenging Fernando Alonso for a fine fifth-place in the 2012 Australian GP when he lost control of his Williams FW34-Renault on the final lap – just one of a number of accidents that punctuated his second season with Williams. He held it together for one glorious Sunday afternoon to deliver the team its first win in eight years. Maldonado qualified on pole position for the Spanish GP and withstood Alonso’s intense late pressure to score a shock maiden F1 victory. However, even that day held more drama for the team’s pit garage was engulfed in flames as they celebrated.

Rather than build on his moments of promise so far Maldonado endured a frustrating final season with Williams in 2013. Unhappy with the new FW35, he finished tenth in Hungary to score his only championship point of an increasingly dispiriting year.

F1 introduced new permanent car numbers from 2014 and Maldonado ignored convention by choosing the previously unlucky number 13. More importantly, he took his much welcome PDVSA money to the cash strapped Lotus team that year. Unfortunately, the Enstone concern had lost key technical staff and, while Williams proved resurgent, Maldonado and team-mate Romain Grosjean struggled in the lower reaches of the field – the Venezuelan finishing no higher than 12th all year.

The team switched to Mercedes-Benz engines for 2015 but it was the Canadian GP before Maldonado scored points. He qualified sixth in Montréal before finishing seventh and matched that result two weeks later in Austria and again in Russia. Lotus owners Genii Capital sold the team to Renault at the end of the season and Maldonado was initially announced as its lead driver for 2016. However, he was replaced by Kevin Magnussen on the eve of the campaign and did not race for the next three years, spending time as Pirelli’s tyre test driver.

He returned in the 2018/19 World Endurance Championship when sharing DragonSpeed’s LMP2 ORECA 07-Gibson with Roberto González and Nathanael Berthon. Berthon had been replaced by Anthony Davidson when the finished second in class in Shanghai and won at Spa-Francorchamps in May 2019. DragonSpeed also entered that year’s Daytona 24 Hours with Maldonado and González joined by Sebastién Saavedra and Ryan Cullen. They recovered from Cullen’s off-track excusion to inherit the class victory when its sister-car suffered suspension issues 45 minutes before the race was red-flagged.