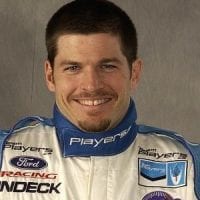 This French-Canadian is a veteran of eight seasons in the Champ Car World Series – a race winner whose career suffered with that category’s demise.

He took his time on the way to Champ Cars for Patrick Carpentier competed in North America’s junior categories for a decade from his car racing debut in 1986. That included championship victory in 1989 Canadian Formula Ford 2000 and culminated with domination of the 1996 Toyota Atlantic Championship for Lynx Racing.

Champ Car Rookie of the Year

Carpentier graduated to Champ Cars a year later with a Bettenhausen Motorsports Reynard 97I-Mercedes. He impressed by qualifying third at Nazareth and finishing second at St Louis. That clinched the 1997 Rookie of the Year award despite missing the final three races due to a broken collarbone sustained in a fall and subsequent practice accident.

He moved to the Canadian-backed Player’s Forsythe Racing for 1998 and remained with the team for seven seasons. On pole position on the short ovals at Nazareth and Milwaukee that year, victory eluded Carpentier for the next few seasons. His best results came at Vancouver in 1999 and St Louis in 2000 when second.

A Champ Car winner at last

But breakthrough victory finally came in spectacular style in the 2001 Harrah’s 500 at Michigan when his Reynard 01I-Ford came from 21st on the grid to beat Dario Franchitti by a scant 0.243sec after a race of an estimated 167 lead changes. Two further victories followed (both on road courses) in 2002 as he clinched a career-best third in the Champ Car standings.

Victories at Laguna Seca were his highlight for the next two seasons and Carpentier was third again in the 2004 championship. That was his last season in Champ Cars after a career that included some lurid moments. He flipped over the spectator fence at Laguna Seca during practice in 2000 and also survived a 155mph accident at Surfers Paradise four years later after his front wing failed.

Subsequent career in Indycars and NASCAR

He defected to the rival Indy Racing League in 2005 to drive a Red Bull Cheever Racing Dallara IR4-Toyota. Third-place finishes at Richmond and Nashville were a modest return in what was his last single-seater campaign to date.

Carpentier made his NASCAR debut in 2007 and completed a full season with Gillett Evernham Motorsports’ Dodge Charger a year later. He qualified on pole position at New Hampshire but finished no higher than 14th. 11th at Sears Point in 2009 when driving Michael Waltrip’s Toyota Camry was the best finish of Carpentier’s stuttering stock car career. He started his last two NASCAR races in 2016 but crashed into Kyle Busch during practice for the Brickyard 400.