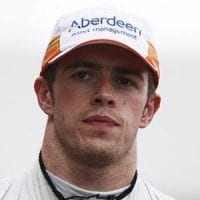 Dario Franchitti’s cousin first came to prominence when named as the 2004 McLaren Autosport BRDC Award winner – recognition of the most promising young British talent of the season. That came at the end of his second season in national Formula Renault – Paul di Resta winning four races for Manor Motorsport and finishing third in the championship.

Title success in Formula 3 and the DTM

He graduated to the 2005 Formula 3 Euroseries with Manor’s Dallara F305-Mercedes-Benz and was quick although incidents marred his campaign. His promise was rewarded with a move to reigning champions ASM to replace Lewis Hamilton. He added consistency to his natural speed to win the Zandvoort Masters and beat team-mate Sebastian Vettel to the title.

Rather than continue in single-seaters, di Resta accepted a Mercedes-Benz contract for the 2007 DTM championship. Fifth in the points for Persson Motorsport that first year, he was promoted to the works AMG squad in 2008 and breakthrough victories at the Lausitzring and Barcelona followed. He finished as runner-up and only lost the title to Timo Scheider at the final round.

Di Resta was third a year later and started to test for the Mercedes-supported Force India Formula 1 team that winter. His original DTM career culminated in a narrow 2010 title triumph when he beat Gary Paffett and Bruno Spengler in a three-way championship decider. That included winning successive races at Brands Hatch, Oschersleben and Hockenheim to take the points lead for the first time that season.

He had also been Force India’s reserve and Friday test driver that year and patience was rewarded when the Scot joined the race team for the 2011 World Championship. That was an impressive rookie campaign as he often outpaced the more experienced Adrian Sutil. Sixth on the grid at Silverstone, his eight top-10 finishes included sixth position in Singapore.

He also starred in the 2012 Singapore GP where he converted sixth on the grid into a career-best fourth place finish. However, 14th in the final standings represented a disappointing return from his second season in F1.

Di Resta remained with Force India in 2013 and matched that fourth place finish at Bahrain. He starred during the wet qualifying session at Spa-Francorchamps when a brave decision to start Q3 on intermediate tyres almost delivered a surprise pole position. Unfortunately, the track dried sufficiently for four slick-shod rivals to eclipse his time. However, the team suffered from the mid-season change of tyre construction and di Resta was 12th overall.

Return to the DTM

Di Resta returned to the DTM championship in 2014 with AMG Mercedes-Benz. Eighth a year later, he scored his first victory since 2010 when he qualified on pole position and won at Hockenheim at the start of 2016. Another three podium finishes included second at Moscow Raceway as he claimed fifth in the final points table. Victory from 13th on the grid in Hungary was the highlight of di Resta’s 2017 DTM campaign although he slipped to 11th in the standings.

Alongside his DTM commitments in 2016 and 2017, the Scot was named as reserve driver for Williams and worked as an analyst on Sky Television’s F1 coverage. Di Resta was drafted in as a late replacement when Felipe Massa fell ill during the 2017 Hungarian GP weekend. He adapted with ease despite not having previously driven the car before he retired after 60 laps.

He challenged Mercedes team-mate for the 2018 DTM title in the final year before the marque left the series. Often hampered by outright qualifying pace, he converted pole position into victory at the Hungaroring. Back-to-back races victories followed at Brands Hatch and in the Misano rain, having again started from pole in Italy. However, a poor final weekend at Hockenheim saw the Scot drop behind Audi’s René Rast into third overall.

Di Resta was chosen to lead the 2019 DTM challenge from newcomers Aston Martin and R-Motorsport. Unfortunately, the new Vantage DTM was no match from more established rivals Audi and BMW. Seventh at Hockenheim at the beginning and end of the season was a disappointing return from a challenging campaign.

In addition to his continuing DTM career, di Resta raced for Zak Brown’s United Autosports in endurance racing from 2018. Fourth overall in that year’s Daytona 24 Hours and fifth at Sebring, he retired from his debut at Le Mans in June. 2018/19 Asian Le Mans Series Champion with Phil Hanson and the team’s Ligier JSP2-Nissan, they finished fourth in LMP2 in the 2019 Le Mans 24 Hours when joined by Felipe Albuquerque.

The following year though, di Resta took a class victory at Le Mans alongside Hanson and Filipe Albuquerque at United Autosports.