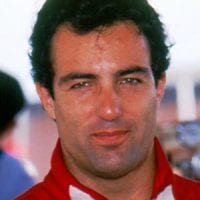 Despite always being a contender in the junior formulae, Paulo Carcasci was never blessed with abundant financial backing and bureaucracy intervened when eventually on the verge of Formula 1.
Single-seater racing career
This Paulista won the 1985 Formula Ford 1600 Euroseries when he more-than matched the likes of Johnny Herbert and Mark Blundell. He raced in FF2000 in 1986 but was still competing at that level three seasons later – albeit having won the 1988 BBC Grandstand British Winter Series.
Carcasci graduated to British Formula 3000 in 1989 with a Reynard 88D-Cosworth and won the Oulton Park Gold Cup when fifth in the points despite only starting three of the nine rounds. With chances to progress in Europe as thin as his commercial backing, Carcasci moved to Japan to race in Formula 3 with the leading TOM’s Toyota team. He won four times and was 1991 Japanese F3 Champion.

A contender once more, he drove a Navi Connection Reynard-Mugen in Japanese F3000 during 1992 and 1993. Carcasci won his second race for the team but only finished on the podium once more. A one-off return to European single-seaters in Estoril’s 1994 FIA F3000 race ended early when the electrics on his Nordic Racing Lola T94/50-Cosworth failed.

Although his career had stagnated once again, the Brazilian raised enough funds to drive for Pacific in the South American Formula 1 races of 1995. But his Grand Prix debut was scuppered when his application for a super licence was denied. He raced in Mexican F3 and had a one-off drive in Indy Lights during 1996, but Paulo Carcasci then faded from the international scene.