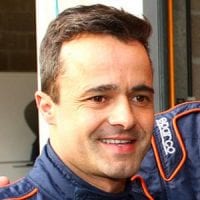 That was followed by the 1989 Portuguese Formula Ford title in his first season in cars and a disappointing subsequent campaign in the GM-Lotus Euroseries. He joined reigning champions Draco Racing for 1991 and crashed out of the lead on the last lap at Imola before dominant displays – a heavy accident at Spa’s Eau Rouge aside – delivered the title.

Still a teenager, he snatched the 1992 German Formula 3 Championship from Marco Werner after a late-season charge in his WTS Reynard 932-Opel. That season also included victory in the Marlboro Masters at Zandvoort and second place in the Macau GP.

Lamy’s rapid climb through the ranks continued in the 1993 Formula 3000 Championship with a Team Crypton Reynard 92D-Cosworth. He was second on his debut at Donington Park and dominated at Pau although his overly rough driving was criticised by his rivals. Lamy entered the final round just point behind Olivier Panis but he was confirmed as runner-up when unable to avoid the crashed cars of Jérome Policand of Jordi Gené.

Formula 1 with Lotus and Minardi

He was already a GP driver by that time – Lamy having driven the injured Alex Zanardi’s Lotus 107B-Ford for the final four races of 1993. He remained with the now Mugen-powered team for 1994 but he was seriously injured when testing at Silverstone. Fractures to wrist and knees ruled him out for the rest of the season.

It was another year before Lamy returned to racing as replacement for Minardi’s Pierluigi Martini from the 1995 Hungarian GP. The season culminating in a sixth place finish in the Australian GP – the only championship point of his career after a race of attrition and accidents. He remained with Minardi for 1996 in what was his first and only full F1 season. He had started 32 GPs but that period of his career was over.

He raced in the 1997 FIA GT Championship instead and also finished fifth overall at Le Mans with a Schübel Engineering Porsche 911 GT1. A move to ORECA’s Chrysler Viper in 1998 was rewarded with eight class wins and the GT2 title with co-driver Olivier Beretta.

He was a member of the ill-fated Mercedes-Benz team for the 1999 Le Mans 24 Hours – withdrawn on safety grounds after its CLR literally flew when following other cars.

Alongside experience in the DTM, American Le Mans Series, Germany’s V8 Star series (2003 champion for Zakspeed) and regular victories in the Nürburgring 24 Hours that decade, Lamy has starred in the Le Mans Series. He won a clutch of championship titles but outright success in the Le Mans 24 hours has eluded Lamy so far.

Left without an LMP1 drive for 2012, Lamy started four rounds of the new World Endurance Championship sharing Larbre’s Chevrolet Corvette C6.R with Julien Canal and Patrick Bornhauser. Sidelined by a gearbox problem in the Sebring 12 Hours, they won the GTE Am class at Le Mans, Fuji and Shanghai.

Having switched to a works Aston Martin Vantage in 2013, Lamy finished as GTE-Am class runner-up up in the following year’s World Endurance Championship with co-drivers Christoffer Nygaard and Paul dalla Lana. Third in class for the next two seasons, Lamy and dalla Lana were joined by Mathias Lauda for the 2017 World Endurance Championship. Their Aston Martin Vantage won GTE-Am on four occasions (Silverstone, Austin, Shanghai and Bahrain) as Lamy, Lauda and dalla Lana claimed the class title. Their only GTE-Am victory of the 2018/19 WEC “super season” came at the opening round at Spa-Francorchamps.