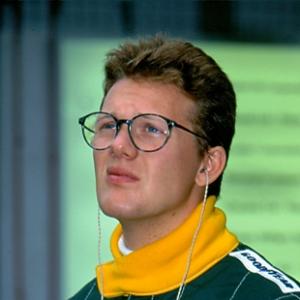 The bespectacled Philippe Adams was a somewhat crash-prone youngster who showed increasingly respectable form in the feeder formulae. A race winner in Formula 3 and 1993 British Formula 2 Champion, he raced in two Grands Prix in what was the final season for the original Team Lotus.

The raw 18-year-old stepped out of karting into the new GM-Lotus series in 1988. Third in the opening two races, he was lucky to only break an ankle when he crashed at Thruxton.

Graduation to British F3 in 1989 included victory at Brands Hatch to confirm his natural talent. But his second season with Bowman Racing’s Ralt RT33-Volkswagen was more frustrating. Sixth in the standings both in 1989 and 1990, his career had stagnated. Adams returned to British F3 in 1992 after a year in Japan. Starting the season in Bowman’s uncompetitive Reynard 923-Mugen, a switch to Alan Docking’s Ralt RT36-Mugen reaped immediate rewards and he finished as runner-up to Gil de Ferran.

Adams won the undersubscribed British F2 Championship (for Formula 3000 cars) in 1993 after again switching teams mid-season. He started the year in Madgwick Motorsport’s Reynard 92D-Cosworth but fell out with the team and completed the year in Argo Racing’s older Reynard. He won the title on appeal after both his and rival Mikke van Hool’s cars were originally protested.

He made his F1 debut a year later. Lotus was in its death throws in 1994 struggling to survive. Adams paid a reported $500,000 for the privilege of racing in Belgium and Portugal – he spun out of his home race and finished 16th at Estoril.

Adams had also started his touring car career in 1994 when driving an Audi in his homeland and in Germany. Runner-up in that year’s Belgian series, he finished third in 1995. Adams has since retired and now works for SEAT Belgium.