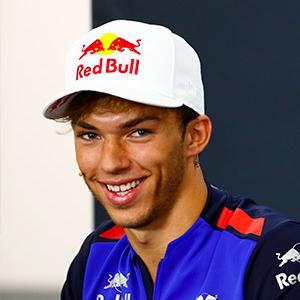 This championship-winning Red Bull junior graduated to Formula 1 in 2017 with Scuderia Toro Rosso and earned promotion to the company’s senior team for the 2019 World Championship. Life in the shadow of Max Verstappen proved difficult and he returned to Toro Rosso after the mid-summer break.

In 2019, Gasly earned his first F1 podium in a memorable drag race to the line in Brazil against Lewis Hamilton while in 2020, he became a race winner for the first time, winning a chaotic Italian Grand Prix.

Having raced karts since 2006, Pierre Gasly graduated to single-seaters in the 2011 French Formula 4 Championship. He recovered from a slow start to the season to win four of the last five races and clinch third in the standings. The young Norman joined R-Ace Grand Prix for the 2012 Formula Renault 2.0 Eurocup although a couple of third-place finishes were his best results. He switched to Tech 1 Racing for his sophomore F.Renault season and won three times to enter the final race with a slender point’s advantage over Oliver Rowland. The title rivals clashed on the opening lap of the second race of that Barcelona decider with the Englishman penalised and Gasly finishing sixth to secure his first car racing championship.

He made his GP2 Series debut at Monza in 2014 although three race weekends with Caterham Racing yielded little in terms of tangible results. Gasly switched to DAMS for the 2015 GP2 season and pole position for three of the final four races was indicative of his improving form. Second-place finishes in the Hungarian and Russian feature races were the race highlights but Gasly’s spin triggered the multi-car accident that forced the Abu Dhabi sprint race to be abandoned. Named as Red Bull reserve driver in September 2015, Gasly tested for both Scuderia Toro Rosso and Red Bull Racing during that year’s F1 rookie tests.

For the 2016 GP2 Series, Gasly joined rookie Antonio Giovinazzi with newcomers Prema PowerTeam. It was an impressive maiden campaign for René Rosin’s outfit for the team-mates disputed the championship. Gasly won four times as he narrowly beat Giovinazzi in the standings, clinching the title in the final race at Abu Dhabi.

Graduation to F1 was initially denied when Scuderia Toro Rosso decided to retain Daniil Kvyat for 2017. Gasly joined Team Mugen’s Japanese Super Formula team instead and won twice to challenge Hiroaki Ishiura for the title. Just half a point behind his rival before the final weekend at Suzuka, he lost any chance of snatching the championship when that meeting was cancelled due to the threat of a typhoon.

Gasly had made his Grand Prix debut by that time when replacing Kvyat at Toro Rosso for the Malaysian GP. He drove in five of the last six races of the season, missing the United States GP as he was committed to the Super Formula finale. He finished on each occasion with 12th in Brazil his best result. Toro Rosso switched to Honda engines in 2018 and Gasly immediately impressed by qualifying fifth and finishing fourth in Bahrain. He started and finished sixth in Hungary but both team and driver lacked consistency.

Promotion to Red Bull and return to Toro Rosso

However, Gasly was promoted to Red Bull Racing when Daniel Ricciardo made the surprise decision to switch to Renault in 2019. That opportunity proved a burden for the Frenchman struggled throughout the first half of the season. There were top six finishes in China, Spain, Monaco and Hungary and he inherited fourth when Sebastian Vettel rear-ended Verstappen at Silverstone. That was not enough for Red Bull’s management and he swapped seats with Toro Rosso’s Alexander Albon from the Belgian GP.

Relieved of the pressure to constantly deliver in a top-six car, Gasly’s return of confidence was palpable. He finished in the points at five of the remaining nine races and excelled in Brazil. Sixth on the grid at Interlagos, Gasly finished in a career-best second position after Lewis Hamilton hit Albon on the last lap.

Seventh in the final standings, Gasly remained with the rebranded Scuderia AlphaTauri for 2020 and continued that rich vein of form when the season finally began. Having scored points in four of the opening seven races, he was on hand to inherit a shock victory when Hamilton was penalised at Monza.