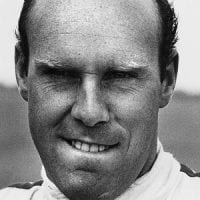 Victory in the 1963 Monaco Formula Junior race launched Richard Attwood on the path to Formula 1 and an international racing career. Not among the pre-race favourites, his Midland Racing Partnership Lola Mk5A-Ford pressured Frank Gardner until he took the lead to win in front of the Grand Prix crowd.

With a father in the motor trade, Attwood’s first experiences in the sport in 1960 were with a Triumph TR3. He was serving his apprenticeship at Jaguar at the time but racing was his focus. Formula Junior for the next two seasons included that success in Monte Carlo but a broken leg at Albi then sidelined him until Boxing Day. Chosen by BRM as a junior driver for 1964, he finished fourth in the News of the World Trophy at Goodwood with an old P57. The team introduced the four-wheel-drive P67 that year and Attwood ran the car in practice for the British GP without ever intending to race. He also raced the Midland Racing Partnership’s Lola-Cosworth in Formula 2 and he finished second at Pau before winning at Aspern.

His fulltime graduation to the F1 World Championship in 1965 was with Reg Parnell Racing’s Lotus 25-BRM. He ran in the midfield but scored points by finishing sixth in Italy and Mexico. However, he was lucky to escape with minor burns when he crashed during the Belgian GP. The car hit a telegraph pole and burst into flames with Attwood pulled clear by a brave onlooker. Attwood also won the F2 Rome GP at Vallelunga and Kyalami Nine Hours (with David Piper’s Ferrari 365P2) that year before starting 1966 with victory for BRM in Levin’s Tasman Cup race. 1966 was a mix of F2 with Midland and sports cars that included another Kyalami victory in Piper’s Ferrari. He was a regular with the Maranello Concessionaires team at the time and was placed third in the Spa 1000Kms and Silverstone’s Martini International during 1967.

Tenth in the 1967 Canadian GP on a one-off with a works Cooper T81B-Maserati, he started six GPs during 1968 when replacing BRM’s lamented Mike Spence. His F1 return at Monaco included fastest lap and the best result of his GP career – his BRM P126 second just 2.2sec behind Graham Hill’s winning Lotus. The rest of the season was a disappointment and Attwood was dropped before the end of the year.rnrnAttwood steered a Lotus 49B-Ford to fourth in the 1969 Monaco GP (after replacing the injured Jochen Rindt) and was sixth in Germany with Frank Williams’ F2 Brabham BT30-Cosworth – his 17th and final GP start.

His main employer by then was the works Porsche sports car team – second at Brands Hatch and Watkins Glen, third at the Osterreichring and fourth at the Nürburgring among his results that season. He also won the Kyalami Nine Hours for a third time, again sharing with Piper.rnThe zenith of his career was victory in the 1970 Le Mans 24 hours when partnering Hans Herrmann in a mighty Porsche 917. That race was immortalised in Steve McQueen’s film Le Mans and the Attwood/Herrmann car survived thunderstorms and a race of attrition to win by five laps. It was Porsche’s maiden victory in the race. He joined John Wyer’s Gulf-sponsored team in 1971 and shared the second-placed 917K at Le Mans with Herbert Müller.

The Osterreichring 1000Kms a fortnight later delivered some consolation as Attwood scored the last major success of his career – he and Pedro Rodríguez coming from three laps down and a flat battery to win thanks to the Mexican’s brilliance in the wet. Attwood retired from racing at the end of 1971 but did make a short-lived comeback in 1984 that included a return to Le Mans with a Nimrod-Aston Martin.