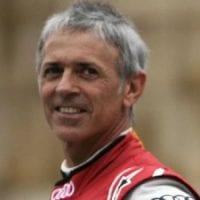 The quiet man of Audi’s mighty sports car team of the early 2000s, “Dindo” Capello is a multiple winner at Le Mans, Sebring and Road Atlanta’s Petit Le Mans. It is an impressive record although his contribution has been somewhat overshadowed by star team-mates Tom Kristensen and Allan McNish.

Capello started his career in 1983 as another single-seater hopeful and raced in Formula 3 from 1985 to 1990. He won the penultimate race of the 1987 Italian F3 Championship and 1988 was his most promising season at that level when driving a Ravarotto Racing Dallara F388-Alfa Romeo. Capello starred in the Monaco support race – climbing through the field from 19th on the grid to finish fourth in a crash-strewn event – and was fourth in the Italian Championship.

Switch to touring cars with VAG

He abandoned single-seaters in 1990 and has represented the Volkswagen Audi Group virtually ever since. Success in Italy’s national Group A saloon car series was immediate, with Capello winning the title at the first attempt in a Volkswagen Golf. He graduated to the Italian Super Touring Car Championship and scored his first victory for Audi in 1994 before winning the title two years later.

His 1998 debut in the Le Mans 24 hours was ended by accident damage to his Gulf Team Davidoff McLaren F1-GTR-BMW. That disappointment gave way to an unbroken seven-year run of success in the race during which time Capello finished no lower than fourth. He joined Audi Sport Team Joest in 1999 and was a regular race winner in the following year’s American Le Mans Series, helping co-driver McNish to clinch the title.

He did a similar job for Kristensen in 2002 with Capello classified as ALMS runner-up on both occasions. The Italian was a nearly man at Le Mans during 2001 and 2002 – qualifying on pole position but only second at the finish on both occasions.

His luck changed in 2003 when VAG’s marketing ploy was to support its Bentley brand at Le Mans. Capello shared a Bentley EXP “Speed Eight” with four-time winner Kristensen and Englishman Guy Smith and again his car started from pole position (although this time it was Kristensen who set the time). They delivered the marque’s first victory for 73 years after a near perfect run at the head of a British Racing Green 1-2.

It was rapidly becoming apparent that being in the same car with Kristensen at Le Mans was the first step to winning the race during the 2000s, and so it proved again in 2004. They shared Team Goh’s Audi R8 with Seiji Ara although initial omens were not positive when Capello suffered a flash fire while refuelling. But they regrouped to defeat the similar Veloqx R8 by less than a lap.

He raced in DTM in 2005 and soon had deserved recognition in the American Le Mans Series when he and Allan McNish won the ALMS title in 2006 and 2007. Capello crashed out of the lead of that latter year’s Le Mans 24 Hours after losing his left rear wheel on the approach to the Indianapolis corner. But he won again in 2008 after rain negated Peugeot’s clear speed advantage in the battle of the diesels.

Winner of the 2012 Sebring 12 Hours, Capello finished second at Le Mans that year – his 10th podium finish in endurance racing’s most famous race. He retired from prototype racing a month later but continued to race for Audi in the Italian GT3 Championship.