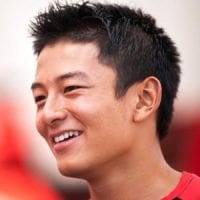 The younger of two racing brothers, Rio Haryanto began competing in Asia during 2008. He won two rounds of that year’s Formula Asia 2.0 championship to finish third overall behind Felix Rosenqvist and Mathias Beche.rnrnHe joined Team Meritus for the 2009 Pacific Formula BMW Championship – winning six times as he beat Irishman Gary Thompson to the title. His European debut followed at Monza with Coloni Motorsport’s F.BMW team but he struggled to make an impression in front of the F1 crowd. Further variety was provided by Australian Formula 3 outings during 2009 – his Astuti Motorsport Dallara F307-Renault sixth and fifth at Sandown Park.

Furthering his career in Europe

Haryanto moved to Europe on a permanent basis in 2010 to race for Manor Racing, combining a full GP3 season with six starts in British F3. The highlight of the former was victory in the sprint race at Istanbul Park having made the most of pole position on the reverse grid. He then qualified and finished second in Silverstone’s feature event as he claimed a surprise fifth in the standings. He completed the year by testing the Manor-owned Virgin VR01-Cosworth during the rookie F1 test at Abu Dhabi.

He remained with Manor’s now Marussia-backed GP3 team in 2011 but failed to score a point until mid-season. Victories in the wet German feature and Hungarian sprint races helped salvage seventh overall from an inconsistent campaign. In addition, Haryanto raced in the Auto GP World Series – winning at Valencia and helping DAMS to the teams’ title. He then made his GP2 debut for DAMS in the non-championship finale at Abu Dhabi.

Graduation to the GP2 Series

Haryanto switched to Carlin for the 2012 GP2 Series and qualified on pole position at a wet Spa-Francorchamps, conditions he obviously enjoyed. He finished fifth in the feature race around Valencia’s harbour but crashed while attempting to take the lead of the following day’s sprint. A pair of sixth place finishes in Bahrain helped Haryanto to 14th in the points. He also drove for Marussia (Manor) in that summer’s Silverstone F1 tests.

His sophomore GP2 season in 2013 was spent with Alejandro Agag’s Barwa Addax concern and he was sixth on the grid for the opening round in Malaysia. Unfortunately, that proved his most competitive qualifying all year and his second place finish in Silverstone’s sprint race was a rare highlight.

A disappointing 19th overall that year, Haryanto moved to EQ8 Caterham Racing for 2014 and again showed promise at the start of the season by qualifying fifth on the grid in Bahrain and Monte Carlo. Seventh in the Monaco feature race, he converted the resulting front row start into third place in the sprint. Unfortunately, Haryanto’s form tailed off thereafter although he challenged for the lead of the crazy Hungarian feature race before his wheel fell off behind a safety car.

For his fourth GP2 campaign, Haryanto joined Campos Racing (formerly Barwa Addax) in 2015 and began the season in Bahrain with his best weekend so far – finishing second on Saturday and scoring his maiden GP2 victory on the following morning. Back-to-back sprint victories followed in Austria and Great Britain and Haryanto was Stoffel Vandoorne’s closest (if distant) challenger by mid-season. He eventually concluded his GP2 career by finishing fourth in the standings.

Once more, he tested for Manor Marussia at Abu Dhabi in December 2015 and, with backing from Indonesian oil company Pertamina, Haryanto was announced as Manor’s second race driver on the eve of the 2016 F1 campaign. The first Indonesian driver to race in F1, he started the first 12 races of the season with 15th in Monaco his best result before his backing ran dry. He was replaced by Esteban Ocon after the German GP and completed the year as Manor’s reserve driver.

Haryanto announced his retirement from racing during 2018, preferring to concentrate on working for the family business, one of the largest stationary and exercise book producers in Indonesia. However, he returned to racing in the following year’s Blancpain Asia GT3 Series.