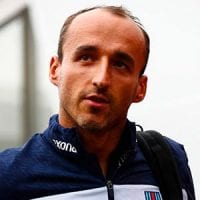 When Robert Kubica’s BMW Sauber won the 2008 Canadian Grand Prix it appeared that the young Pole had an outside chance of stealing the world championship. But his team decided to suspend development of the car and concentrate on its 2009 challenger. His hopes faded and so did BMW’s commitment to Formula 1.

Considered by many to be among the best GP drivers around and thought to be on Ferrari’s radar for the future, Kubica was severely injured during a minor rally just weeks before the 2011 season. His rehabilitation was complete when he returned to the F1 grid with Williams in 2019 although it proved a difficult campaign at the wrong end of the grid.

Despite little tradition of international motor racing in Poland before him, Kubica was dedicated to the sport from an early age. He was karting in local car parks long before he had reached a legal age to do so.

Finance was in short supply but Kubica enjoyed a successful karting career throughout Europe before graduating to cars in 2001. Runner-up in the 2002 Italian Formula Renault Championship, his first season in the Formula 3 Euroseries was delayed by a broken arm when a passenger in a road accident. Kubica missed six races before fit enough to join Prema Powerteam but he promptly won on his debut at the Norisring to confirm his talent.

However, he failed to build on that promise in 2004 with ASL-Mücke Motorsport’s Dallara F302-Mercedes-Benz when seventh in the championship. But he ended the season on a high by switching to Manor Motorsport’s similar car to finish second at Macau.

Kubica dominated the 2005 Formula Renault 3.5 Championship for Epsilon Euskadi and finished second at Macau once more with Carlin Motorsport’s Dallara F305-Mugen. That title success was rewarded with an impressive Renault F1 test that prompted BMW Sauber to sign him as its reserve driver for the 2006 F1 season.

Initially testing on the Friday of GP weekends, he replaced the disappointing Jacques Villeneuve from the Hungarian GP and was immediately on the pace. He led and finished third at Monza in only his third race as a GP driver – it was impressive stuff and Kubica was retained for the following season.

Sixth in the 2007 championship despite missing a race after a spectacular barrel-roll in Canada, he was a genuine challenger in 2008. Kubica qualified on pole position in Bahrain and finished second in Monaco. He then scored a maiden GP victory for BMW Sauber and Poland in the Canadian GP after Lewis Hamilton crashed into Kimi Räikkönen in the pitlane. That gave Kubica the world championship lead but rather than sustain that momentum he faded to fourth in the standings. Kubica cut a frustrated figure as the team decided to concentrate on its 2009 challenger.

But the team proved no match for Brawn and its double diffuser or the emerging Red Bull Racing during 2009. Second in Brazil was his only podium of a largely frustrating campaign after which BMW announced its withdrawal from F1.

Switch to Renault and rallying accident

Kubica replaced Fernando Alonso at the crisis-torn Renault team in 2010 and started the season with aplomb – his second place finish in Australia was a massive fillip for the team. Third in Monaco (after qualifying on the front row) and Belgium, Kubica was eighth in that year’s world championship.

However, Kubica crashed a Skoda Fabia at high speed during the minor Ronde di Andora Rally on February 6 2011. A section of barrier penetrated the car and Kubica suffered severe injuries to right arm and leg. Only fit enough to leave hospital in April, the rest of the year was spent in slow and private recuperation.

With future circuit-racing plans uncertain, Kubica made an impressive return to rallying in 2012 – winning a national Italian event and also proving his speed when he sampled a World Rally Championship-spec Citroën C4. He won the 2013 WRC2 title and has continued to compete in that form of the sport. Budgetary constraints restricted his 2016 WRC programme to the Monte Carlo Rally but he returned to circuit racing in the Mugello 12 Hours with a GT3 Mercedes-Benz SLS AMG.

Kubica never gave up hope of returning to F1 and he tested for Renault at the Hungaroring on August 2 2017. He was considered by Williams for the following season before the team eventually opted for Sergey Sirotkin instead. Williams reserve driver during 2018, Kubica was promoted to the race team in 2019 to complete a remarkable comeback.

Unfortunately the new FW42 was the worst car in the field and Kubica could not match rookie team-mate George Russell. Confined to a year at the back of the field, he was outqualified at every race but scored the team’s only point when promoted to tenth thanks to Alfa Romeo’s post-race penalties following the chaotic German GP.

Replaced by Nicholas Latifi at the end of the season, Kubica signed as Alfa Romeo’s F1 reserve driver for 2020.

As part of his role, the Pole has driven FP1 at the 2021 Spanish Grand Prix as well as during a two-day Pirelli test ahead of the 2022 introduction of 18-inch tyres.

Kubica drove in the 2020 DTM season for BMW Team ART. He finished the season 15th in the standings with 20 points and one podium finish, a third place at Zolder.