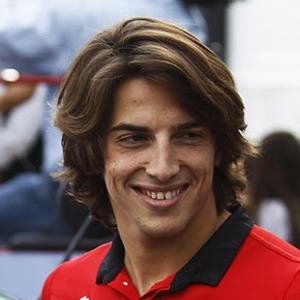 The 2011 European Formula 3 Champion, Roberto Merhi graduated to Grand Prix racing four years later with the reborn Manor Marussia équipe. Undeniably fast on his day as he climbed the single-seater ladder, Merhi’s had been inconsistent and aggressive thus far. But having reached the Promised Land of Formula 1 in 2015, Merhi and team-mate Will Stevens were forced to use year-old cars during the Spaniard’s only race appearances at that level.

His 2006 motor racing debut was a low-key affair in Porfesa Competición’s Dallara F300-Toyota at the Circuit Ricardo Tormo outside Valencia. He ended the year racing in the Italian Formula Renault 2.0 winter series and Merhi decided to remain in that category for the following season.

His 2007 Italian F.Renault 2.0 campaign with Jenzer Motorsport included victory at Spa-Francorchamps as he finished fourth overall. He switched to Epsilon Euskadi for his second full season and was narrowly beaten by Daniel Ricciardo to the 2008 F.Renault 2.0 West European Cup. In addition, Merhi won Barcelona’s final two Spanish F3 races for Tec Auto to prompt his next move.

Merhi joined Manor Motorsport – the team with which he would eventually make his F1 debut – for the 2009 F3 Euroseries. Fast from the outset with the team’s Dallara F308-Mercedes-Benz, he scored three second place finishes and completed an inconsistent rookie campaign in seventh overall.

He switched to Mücke Motorsport for a disappointing sophomore F3 season in 2010. The highlight was victory at Hockenheim (from fifth on the “reverse” grid) but fifth in the championship was not the title challenge that had been expected. Merhi also joined Atech CRS GP’s GP3 team from the third weekend that year and immediately scored a couple of podium finishes at Valencia. Also second at Spa-Francorchamps, Merhi was sixth in the points despite that late start.

The field for the 2011 F3 Euroseries was threadbare with Merhi’s Prema Powerteam Dallara F308-Mercedes-Benz among the 12 cars that lined up for the opening round. You can only beat the opposition in front of you and the Spaniard dominated – winning 11 times to ease to the title (Prema’s first since 2003) while adding the new European F3 Trophy as well. Despite that, the new champion’s occasional errors remained. He caused a multi-car accident at the start of the Zandvoort Masters and was penalised at Macau after crashing into Felix Rosenqvist during qualifying.

Rather than accept an offer to race in GP2, Merhi joined the Mercedes-Benz junior team for the 2012 German Touring Car Championship (DTM). Unfortunately, his season in Persson Motorsport’s Mercedes C-Coupe was hampered by poor qualifying (starting no higher than 14th at Zandvoort) and Merhi failed to score a point all season although he did set the fastest lap of the Oschersleben race.

He switched to Mücke for the 2013 DTM season but his qualifying travails remained. It was in the final race of the season at Hockenheim that Merhi finally came good. Starting from the last row of the grid, Merhi served a drive through penalty for jumping the start before storming through the field on a drying track to finish second. 15th in the final standings; that was the highlight of two frustrating seasons in the DTM.

Replaced in the Mercedes DTM line-up as a consequence, he returned to single-seaters by joining Zeta Corse on the eve of the 2014 Formula Renault 3.5 Championship. Immediately back on the pace and a contender to the final weekend, Merhi won three mid-season races as he finished third overall in what was a welcome return to form. He joined the struggling Caterham F1 team as Friday test driver at three GPs but a rumoured race debut did not materialise. Merhi’s year finished with fourth place at Macau as he stepped back to F3 with Räikkönen Robertson Racing’s Dallara F313-Mercedes.

Just six days after announcing that he was returning to F.Renault 3.5 with Pons Racing, Merhi was revealed as Manor Marussia’s second driver for the 2015 F1 World Championship. Driving a year-old chassis for the category’s minnows, he started 13 GPs (replaced by Alexander Rossi on the eve of the Singapore GP) with 12th at Silverstone his best result. Merhi also started eight FR3.5 races when his F1 schedule allowed and finished second at the Hungaroring.

Switch to sports cars with Manor

Founder John Booth sold the Manor F1 team after that 2015 campaign and both he and Graeme Lowden left to set up an LMP2 sports car team for the following year’s World Endurance Championship. Merhi drove one of the team’s ORECA 05-Nissans in seven championship rounds and finished third in class at Spa-Francorchamps thanks to an audacious last-lap pass into La Source.

He made a one-off return to Manor’s LMP2 line-up at the 2017 Nürburgring Six Hours while trying to re-establish his single-seater career in FIA Formula 2 (formerly GP2).rnrnUnsuccessful on a one-off appearance with Campos Racing at Barcelona, Merhi switched to Rapax for three of the last four race weekends – scoring points in each race at Spa-Francorchamps and finishing fifth in Monza’s sprint race.

Mehri began the 2018 F2 season with MP Motorsport and finished third in the feature race at Monte Carlo. Denied another third-place finish after charging through field at the track dried at Paul Ricard due to illegal tyre pressures, he was 11th in the standings when he left MP Motorsport after the Hungarian GP meeting. He returned to Campos for the final two race weekends in Russia and Abu Dhabi and scored points in all four races for the team. That included converting pole position for the “reverse grid” sprint race into another third-place finish in Abu Dhabi.

Merhi tested for Campos before the 2019 season but next raced in the opening round of the 2019/20 Asian Le Mans Series – finishing second at Shanghai with Eurasia Motorsport’s Ligier-Gibson.