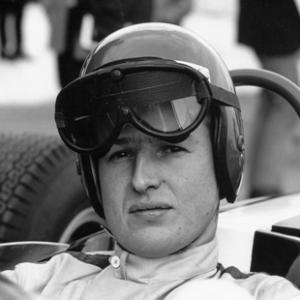 This English public school boy was a one-time Grand Prix driver who also represented Great Britain in the 1964 and 1968 Winter Olympics in both the two- and four-man bobsleigh.

The son of a Battle of Britain fighter pilot, Robin Widdows was persuaded to start racing by Eddie Portman who bought him an MG Midget in 1964. He switched to a Barwell Motors-prepared Lotus 23-BRM for the following season and won his class in the 1965 Autosport Championship.

That success prompted Widdows to leave his job in property and turn professional just as he lost Portman’s backing. A Brabham BT18-Ford was acquired for Formula 3 in 1966 and he won a minor race at Castle Combe.

The Witney Racing Syndicate was formed by his parents and some friends to fund his 1967 graduation to Formula 2 with a Brabham BT23-Cosworth. He won the non-championship race at Hockenheim and switched to Chequered Flag’s McLaren M4A-Cosworth for 1968. That campaign included a fine second to Jackie Stewart at Pau and third in the Monza Lotteria.

He also made his only GP start that year when he drove a works Cooper T86B-BRM in the 1968 British GP at Brands Hatch. Widdows qualified 18th and ran in the lower midfield before the ignition failed. His season was ended by an accident while testing JW Automotive Mirage-BRM at Snetterton that aggravated a previous bobsleigh injury.

For 1969, Widdows contested another season of F2, initially with a works Merlyn 12 before joining Bob Gerard Racing. Driving a Brabham BT23C-Cosworth, Widdows won the Monza Lotteria (a non-championship race that year) and finished second at Reims a week later. He also started the Le Mans 24 Hours for the only time when a delayed seventh in the works Matra-Simca MS630/650 he shared with Nanni Galli.

He finished fourth at Thruxton and Montjuich Park at the start of 1970 with Alistair Walker’s F2 Brabham BT30-Cosworth before making the sudden decision to retire in June. He was later the representative for Moët et Chandon champagne in Formula 1.