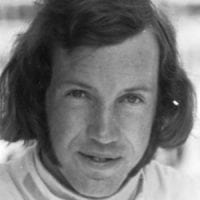 A resident of The Hague, Roelof Wunderink began his racing career in 1970 with a Group One Simca Rallye saloon. He switched to Formula Ford two years later and won back-to-back Dutch titles in 1972 and 1973 driving a Lotus.

His first experience with Mo Nunn’s Ensign marque was in Formula 3 during 1973 but success was limited. With backing from HB Bewaking, he drove an ex-Teddy Pilette Chevron B24 in the 1974 European Formula 5000 Championship although little marked Wunderink as a future star.

HB’s sponsorship smoothed a move to Formula 1 with Ensign in 1975. He entered the early season non-championship races and finished 10th in the Race of Champions at Brands Hatch. He retired from his debut in the Spanish Grand Prix before failing to qualify in Monaco.

He then suffered a broken cheekbone and severe facial lacerations after crashing Tony Dean’s F5000 Chevron B24 while testing at Zandvoort. He returned for another four GPs but only qualified in Austria and the United States. The disillusioned Wunderink slipped quietly away from racing at the end of the season.