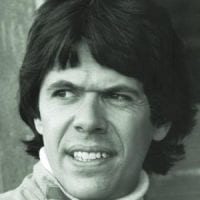 Romeo Camathias was a Swiss amateur sports car driver who scored successive second-place finishes in the 1977 World Championship of Makes. His uncle Florian Camathias was a sidecar rider of some repute who won Grands Prix during the 1950s and 1960s but was killed at Brands Hatch in 1965.
It was in 1973 that Romeo Camathias started racing cars and he spent three years peddling a Fiat 128 in the Italian Saloon Car Championship. He drove an Alfa Romeo 2000 GTV in the 1976 European Touring Car Championship when he was third at the Nürburgring.

His next international outing was in sports cars at the start of 1977 when invited to join regulars Martino Finotto and Carlo Facetti in the Jolly Club’s Porsche 935 for the Daytona 24 Hours. They were in contention for a surprise victory until hampered by late brake problems and had to settle for second position. The trio repeated that result at the next championship round at Mugello – the best finishes of Camathias’s career.

He drove Heine Mader’s Ralt RT1-BMW in the opening two rounds of the 1978 European Formula 2 Championship – finishing 16th at Thruxton but failing to qualify at Hockenheim. Camathias finished his career in the ETCC once more, racing until 1988 with enthusiasm but little in the way of results.
His son Joël later raced in the 2001 FIA Formula 3000 Championship.