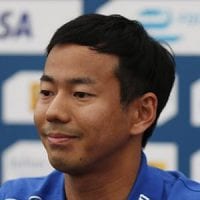 Formula 1 history is full of drivers whose inclusion was due more to commercial consideration than talent. Sakon Yamamoto certainly qualified among that number after three partial seasons at the back of the Grand Prix field.

Yamamoto’s first season in cars was 2001. He finished fourth in the Japanese Formula 3 Championship with a TOM’s Dallara F301-Toyota after scoring a pair of second place finishes at Aida. The year ended with a limited campaign in British Class B F3 for Avanti Racing and he remained in Europe for the next two seasons. Initially that was with Team Kolles and GM Motorsport in Germany before he joined Superfund TME for the 2003 F3 Euroseries. However, he rarely finished in the top 10 during either campaign.

Yamamoto rejoined TOM’s for 2004 Japanese season and scored his only F3 win at Motegi. He graduated to Formula Nippon with Kondo Racing in 2005 while also racing for TOM’s in the Super GT series. In addition, Yamamoto undertook Friday-testing duties for Jordan at that year’s Japanese Grand Prix.

He joined Super Aguri in that role from the 2006 British GP and was promoted to the race team in Germany, replacing Franck Montagny. His sponsorship backing may have been welcome but 16th was his best finish in seven starts.

He began 2007 in GP2 with BCN Competición and Yamamoto was an F1 driver again by mid-season. He drove a Spyker F8-VII-Ferrari for the last seven races of the season – normally qualifying at the back and finishing last. The exception was his home race when he finished in a career-best, but hardly startling, 12th despite the monsoon conditions.

A reserve driver for Renault in 2008, Yamamoto returned to GP2 in the middle of that year with ART Grand Prix and finished fourth in the sprint race at the Hungaroring. Having spent 2009 driving a Team Rosberg Audi R8 LMS in German GTs, Yamamoto returned to F1 at the 2010 British GP for another seven underwhelming races with newcomers HRT. He began 2011 as a reserve driver for the Marussia Virgin team but did not race in F1 again.

He replaced António Félix da Costa for the final weekend of the electric Formula E’s maiden season – the 2015 London ePrix in Battersea Park. Yamamoto retired from both races that weekend on his last appearance on the international stage.

Now working in the medical and welfare industry in Japan, he also lectures on the subject and contributes to the country’s motor racing media.