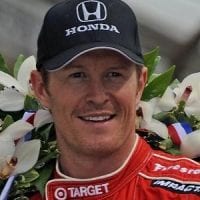 New Zealand has a proud tradition in Grand Prix racing but had not tasted such success at Indianapolis until May 25 2008. That was the day Scott Dixon crossed the hallowed line of bricks to score his greatest victory thus far. Now a five-time IndyCar champion, Dixon ranks among the modern greats of that discipline.

With parents who both raced dirt cars, it was little surprise that he wanted to race from an early age. And he was immediately successful by winning the national Formula Vee Championship in 1994 when only 13 years old.

Dixon quickly gained a reputation as the country’s brightest prospect. He won the 1996 New Zealand Formula Ford title before transferring to Australia’s Formula Holden Championship. Rookie of the Year in 1997 when third in the points, the outright title followed a year later.

Formula 1 may have been Dixon’s original goal but he moved to America and Indy Lights to progress. A promising debut with Johansson Motorsports was followed by a switch to PacWest Racing and further title success in 2000.

Dixon graduated to Champ Cars with the team and it took just three races of 2001 for the New Zealander to win at Nazareth and become the youngest winner in major open-wheel racing at 20 years 9 months and 14 days old. The year ended with Dixon eighth in the points and Rookie of the Year in yet another series.

PacWest ran out of money early in 2002 but Dixon was picked up by Chip Ganassi’s expanded Champ Car operation. It was a disappointingly winless campaign before team and driver defected to the rival Indy Racing League for 2003.

That season could not have started better with Dixon winning the opening round at Homestead. Five pole positions and another two victories gave Dixon the IndyCar Series title at the first attempt although that was followed by two difficult seasons which only included one win (at Watkins Glen in 2005).

The arrival of reigning champion Dan Wheldon to Ganassi for 2006 seemed to re-awake Dixon’s competitive juices and he won twice to finish fourth in the points. He only lost the 2007 title to Andretti Green’s Dario Franchitti when he ran out of fuel on the last corner of the final race.

But he put that right in style a year later. The Indianapolis 500 was one of six victories as Dixon clinched the 2008 Indycar title. Franchitti was Dixon’s Ganassi team-mate in 2009 and they contested the title once more with the Scot again triumphing at the final round.

Although Dixon won races, he struggled to match his team-mate on a regular basis and finished third in both years. Seemingly always unlucky during 2012, he won twice to finish third in the standings once more.

Dixon’s 2013 campaign began slowly although leading a Ganassi 1-2-3 at Pocono in July set the New Zealander on the road to a third Indycar series success. He won both races at the following weekend’s Toronto double-header and overhauled Penske’s Hélio Castroneves by the end of the season.

Third in the championship a year later (and with Franchitti now retired), Dixon won the final round at Sears Point to tie Juan Pablo Montoya in the 2015 standings. However, having won three times to Montoya’s two victories, it was Dixon who claimed the Indycar title for a fourth time.

Dixon won the second race of 2016 at Phoenix’s one-mile oval and spent the early months as Simon Pagenaud’s closest challenger. Victory in Toronto was lost due to an in-opportune safety car as bad luck derailed his title defense. Dixon won the penultimate round at Watkins Glen but sixth overall was his lowest championship position in a decade.

He enjoyed a consistent campaign during 2017 with his narrow victory at Elkhart Lake among seven podium finishes. He qualified on pole position for the Indianapolis 500 only to crash heavily during the race. Just three points behind Team Penske’s Josef Newgarden before the Sears Point decider, Dixon slipped to third in the standings when he could only finish the race in fourth position.

Now In his fifteenth full season with Chip Ganassi Racing, Dixon scored his first podium finishes of 2018 in the Indianapolis Grand Prix and Indy 500 before winning at Detroit (race one), Texas and Toronto. Successive third-place finishes at Pocono and St Louis saw the New Zealander enter the final race at Sears Point with a lead in the championship. He drove a conservative race in California to seal his fifth IndyCar Series title.

Teamed with impressive rookie Felix Rosenqvist for 2019, there were uncharacteristic errors and polished drives alike during Dixon’s title defense. On the podium at four of the opening five rounds, he rebounded from hitting the wall in the curtailed race one in Detroit to win race two. He crashed with Colton Herta at Texas before withstanding Rosenqvist’s pressure to win at Mid-Ohio despite his worn tyres. Second at Pocono kept Dixon’s title hopes alive only for costly mechanical failures at the next two races. Dixon finished third at the final race at Laguna Seca to claim fourth in the final points.

The closest Dixon came to fulfilling his youthful F1 ambitions were tests with Williams-BMW in 2004. He also made his Daytona 24 Hours debut that year and won the race two years later when sharing Ganassi’s Riley MkXI-Lexus with Wheldon and Casey Mears. That was a success he repeated in 2015 with Ganassi’s Riley-Ford, Tony Kanaan and Kyle Larsson.

He made his debut at Le Mans in 2016 when sharing Ganassi’s Ford GT with Ryan Briscoe and Richard Westbrook. They finished third in class as the sister car won on the marque’s return.

Dixon put together a strong start to a Covid-impacted season to put himself in a good enough position to claim a sixth IndyCar championship in 2020. Three straight victories to open the year was followed up by just a single one in the remaining 11 races, but a third-place finish in the finale at Grand Prix of St. Petersburg by 16 points over Josef Newgarden.